Whatever Happened To? Crich Tramathon 2005 – GMJ

Posted on Monday 11 October 2021 by Gareth Prior

And so we come to the 28th and final part of this, the third, series of “Whatever Happened To?” where we have been taking a look at all the trams and works vehicles which ran on the mainline during the 2005 Tramathon at the Crich Tramway Village. In this part we feature a vehicle which can’t by any stretch of imagination be considered a tram but has still been a vital member of the fleet at Crich over the years, we are talking about small diesel locomotive GMJ.

Small diesel shunter GMJ has been operational at Crich for most years since 1969 and in fact it was the vehicle with the biggest connection to the site as it had also been used as a shunter when it was still in use as a quarry. It was rescued by TMS volunteers in 1965 from Ambergate where it had received some fire damage although this was not severe enough to prevent it from being restored to service from 1969. At that time it was regauged to standard gauge and has been regularly used for vital shunting for the majority of the time since. As well as shunting it also sees use at some special events for demonstration runs, often along with fellow diesel shunter Rupert.

In 2005 both of the shunters made appearances on the mainline but for some reason we only have a photo of GMJ, hence why this series is 28 parts long and not 29! Both remain at Crich and continue to provide their vital role in moving trams around and to enable maintenance to take place although are probably used less than they used to, especially with the Croydon Tramlink KLV now on site.

12th June 2005 at Tramathon and although it did make it out onto the mainline this photo captures GMJ in front of the entrance to the Exhibition Hall – with its “Tracks in Time” exhibition. 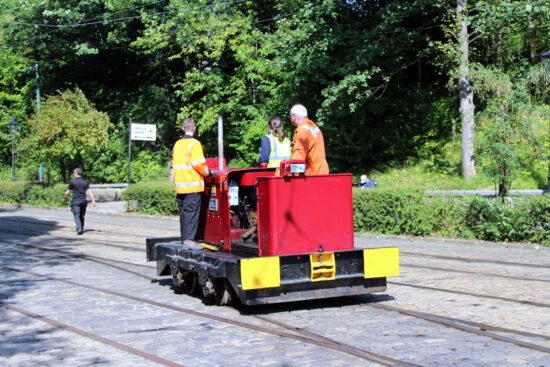 This is 1st September 2018 where we see GMJ just leaving the depot yard for a trip up the line. (Both Photographs by Gareth Prior)