Posted on Thursday 7 October 2021 by Gareth Prior

Seemingly competing with the Blackpool North Railway Station tramway extension for how long can it possibly take to complete, work on the Douglas Bay Horse Tramway has been continuing over the summer months on the Isle of Man with tracks being laid on the final section as far as Broadway. In this latest pictorial update we have a look at the scene in early October on Central Prom and towards the Sea Terminal. Geoff Pickles provides the pictorial side of the article.

Its been a while since we last reported on the situation for the tramway so a reminder of where we are. It has been agreed that the Douglas Bay Horse Tramway will run at least between Derby Castle and Broadway with the tracks running along the centre of the road until the very end of this section when they swing across the Prom road to a temporary terminus. It had been hoped – and there was previously a vote in favour of this – that the tramway would then run on a single track alignment at the side of the road all the way to the Sea Terminal on a new tram corridor. However, there is still no guarantee that this section will be laid with funding seemingly not in place and the understanding is that a further Tynwald vote will be needed (with elections having taken place during September presumably it will be discussed in due course) to give permission for the umpteenth time for the full line to be constructed.

No Douglas Bay Horse Tramway services have run in either 2020 or 2021 bit it is hoped that there will be a return in 2022 – but whether this will be from Derby Castle to Broadway or Derby Castle to the Sea Terminal remains to be seen. 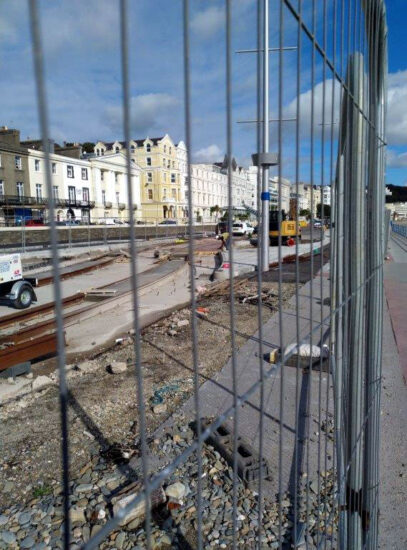 Central Prom and through the fencing we see the tracks as they swing from the centre of the prom to the side. Considering back in August it was suggested all work would be completed by the end of September and we are now in October that has clearly not been the case and it has now been said it will be November for a completion…

The Villa Marina is on the right in the mid-distance with tracks in situ in the foreground. A significant amount of work still seems necessary here. 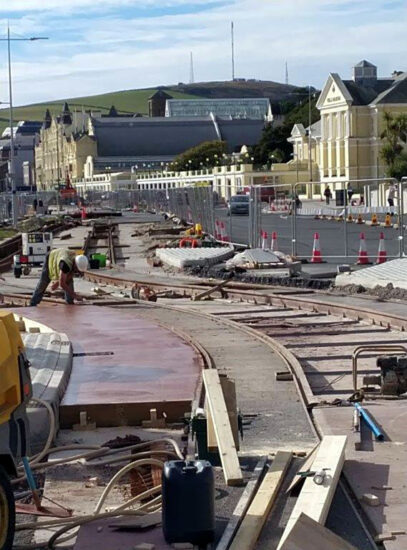 Central Prom once more with a solitary workman putting the finishing touches to the surface by the southbound track. 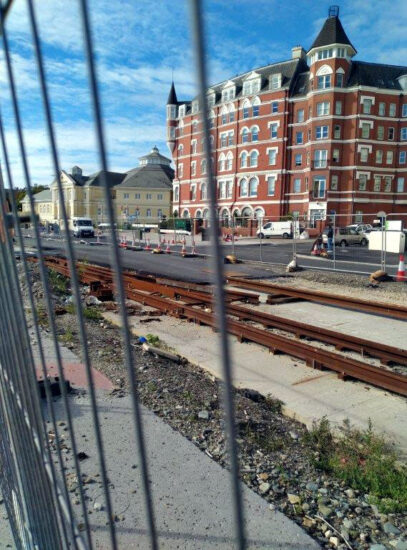 The only turnout so far installed near the junction with Broadway. 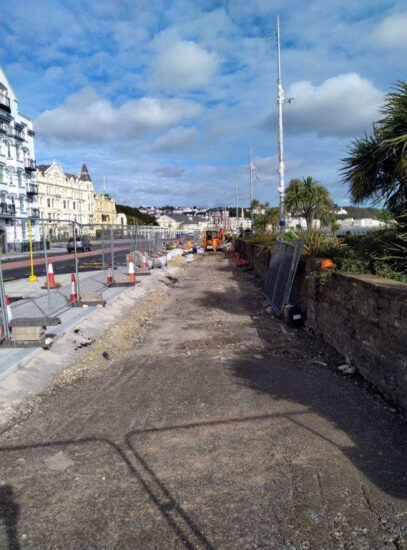 The “tram corridor” on the right here where we can all but hope will eventually see tram tracks installed all the way through to the Sea Terminal. 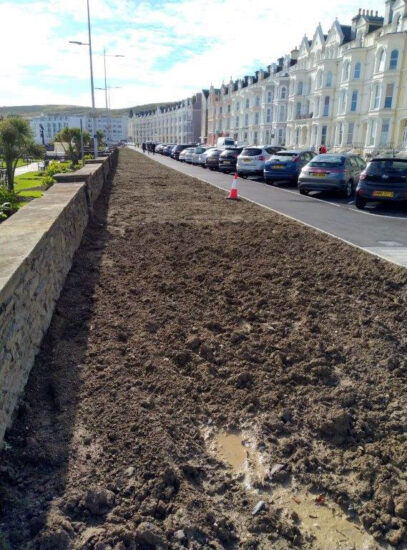 Temporary landscaping is due to be put in place on the tram corridor although this is currently just a muddy mess! (All Photographs by Geoff Pickles, 6th October 2021)