In Pictures: Balloon 700 goes back to wartime colours

Posted on Wednesday 29 September 2021 by Gareth Prior

It was due to be the highlight of the Anniversary Weekend in Blackpool – the unveiling of (and possibly the worst kept secret for some time!) Balloon 700 back in the popular Wartime Green and Cream livery it last carried between 1997 and 2009. Unfortunately, a fault meant its debut in public service on Sunday 26th September wasn’t possible but it had still escaped onto the Prom the previous day showing off its new paintwork for a brief Private Hire allowing those in Blackpool to catch sight of the new look tram and to whet the appetite for the future.

When 700 returned to service back in 1997 following a partial heritage overhaul it received many original features such as double destination screens and a trolley along with a stunning repaint into the dark green and cream Wartime livery style. Although the trolley was removed a few years later with the tram running with a pantograph since the tram still looked the part all the way up until it was selected for conversion into a “B fleet” Balloon with the addition of widened central entrances to allow it to operate from the LRT platforms. At this point it lost its green and cream livery initially in favour of a ghostly white livery in 2011 and then from 2012 when the upgraded tramway opened a Flexity style purple and white colour scheme.

Since then enthusiasts have constantly asked for the tram to return to the Wartime livery and that has now come about with it spending time in the Paint Shop over the past few months returning it to green and cream colours. The tram remains a fully fledged member of the “B fleet” and retains all modern additions (bumpers, widended entrances etc.) but with the “B fleet” again seemingly restricted to the depot having not been used in service for a while it remains to be seen whether it is used more for heritage use or LRT specials.

700 had been released from the Paint Shop during September and could be spotted at the front of the depot in its new livery in the lead up to the Anniversary Weekend. It had been allocated to heritage service on Sunday 26th September but did manage to escape onto the Prom on Saturday 25th September when it ran a brief Private Hire from North Pier and Tower back to the depot. Unfortunately, this was to prove its only use on the Prom during the weekend as on Sunday morning it was declared a failure before leaving depot and was replaced by 701. Nevertheless the tram does look the part and hopefully it won’t be too long before it is back in service in Wartime green and cream. 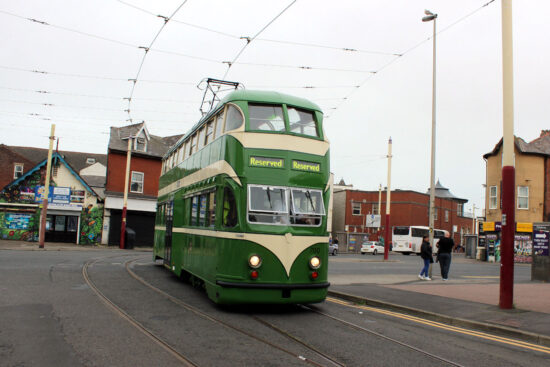 700 returns to depot after carrying its first passengers in Wartime livery during a brief Private Hire. 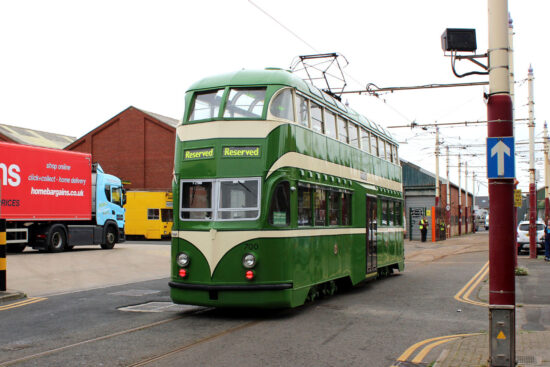 Another look at 700 as it heads along Hopton Road and into depot. (Both Photographs by Malcolm Slater, 25th September 2021)

2 Responses to In Pictures: Balloon 700 goes back to wartime colours