In Pictures: Metrolink works at Victoria

Posted on Wednesday 15 September 2021 by Gareth Prior

This summer has been a busy time for engineering works on Manchester Metrolink. Earlier in the summer there was major work on the Eccles line whilst there has also been work taking place in Manchester City Centre and at Victoria leading to several different closures to allow the work to be completed safely. Mid-September has seen further work at Victoria which has necessitated the closure of the usual inbound platform (platform A) while the Second City Crossing (2CC) is closed with trams unable to access this line from Victoria during the work.

The work during the week of 13th September is seeing the inbound curve leading from platform A at Victoria being replaced with the platform being closed to trams meaning platform changes for services calling at Victoria. This also means that trams running on the Manchester Airport to Victoria route are unable to remain stabled in the centre platform which has seen them instead run to Crumpsall to turn.

Metrolink last week confirmed that there would be no services running via 2CC throughout the week but this was said to be linked to works at Exchange Square (although there is currently no evidence of this work). This is seeing all trams between East Didsbury and Rochdale Town Centre running via the original city crossing. 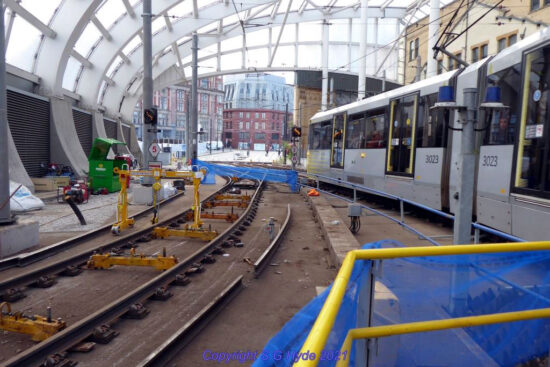 As 3023 passes through the junctions bound for Trafford Bar we can see work in progress on the inbound curve with new rails clipped to the baseplates which await fastening down to the concrete slab. Sections of old worn rail can be seen alongside. 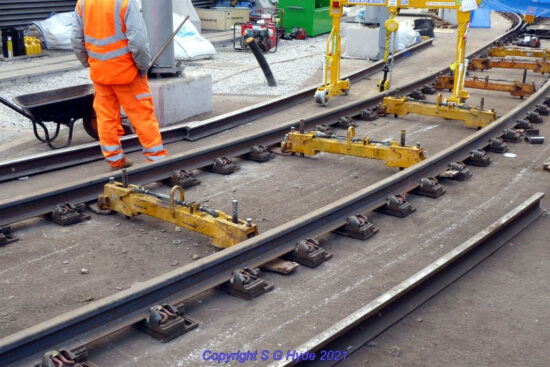 A closer view of the new rails and baseplates. The jigs to hold the rails to gauge whilst they are positioned and fastened down are clear to see. It is understood that the new curves are being laid with a slight cant to reduce the rate of wear. 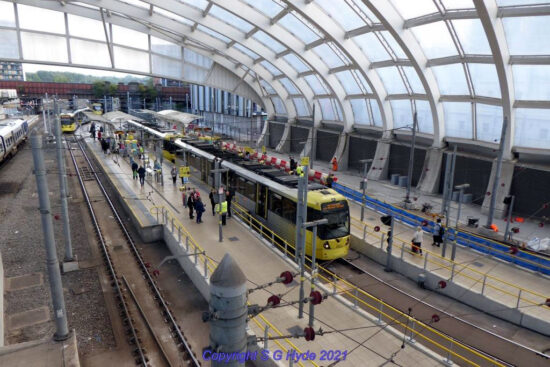 A view from the Arena footbridge showing a Bury to Altrincham service in the centre road formed of 3012 & 3040 awaiting departure as a Bury to Piccadilly service follows it into the platform. Outbound 3053 can just be seen leaving for Shaw. Barriers are in position along the normal inbound platform face. (All Photographs by Steve Hyde, 14th September 2021)