Posted on Friday 3 September 2021 by Gareth Prior

Its time to head to Blackpool in 1976 again for this edition of “Picture in Time”.

Today, Balloon 707 has been rebuilt with flat fronts and can be found in a traditional coat of green and cream paint but back in 1976 it was still in the traditional shape of a Balloon but its livery was anything but traditional! A year previous to this photo and all over advert liveries were unheard of in Blackpool but then in May 1975 and a change after 90 years was to come with the application of this advert for Empire Pools on 707. With its bright colours – a far cry from many more recent adverts – 707 would certainly turn heads and would pave the way for many more adverts to follow over the years. This design for Empire Pools would remain on the tram until the end of the 1977 season.

In this photo we see 707 on the centre track at Talbot Square (North Pier) having just terminated with a service from the north. It must be another warm day with the driver’s windscreen open almost as far as it can be. 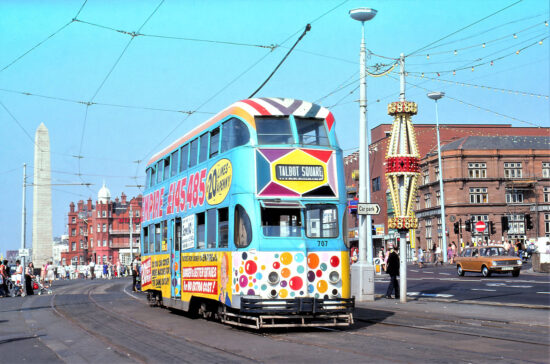