Posted on Friday 27 August 2021 by Gareth Prior

We return to 1976 again for this latest edition of “Picture in Time” as we are off to Blackpool for some more views of the tramway as it was back then.

Today we are featuring OMO 11 in two images taken in Fleetwood in the early part of September 1976. 11 was one of the 13 English Electric Railcoaches which were converted into One Man Operated trams in the 1970s with this particular example having started off life as no. 268 (renumbered 615). It entered service as an OMO in May 1975 so by the time of this photo it was just over a year old, at least in this condition anyway. It would remain in service until 18th March 1993 when it became the last of the class to run in normal service. Sold on for testing purposes it would eventually be scrapped.

In this first view we see 11 passing St Peter’s Church in Lord Street, Fleetwood (a church which frequently gets included in shots of trams in the centre of Fleetwood). In the background of this shot there seems to either be some trackworks or roadworks taking place (or about to). At this time there was some ribbon welding being undertaken by the German firm Elektro-Thermit although its not known if this is what was happening here. 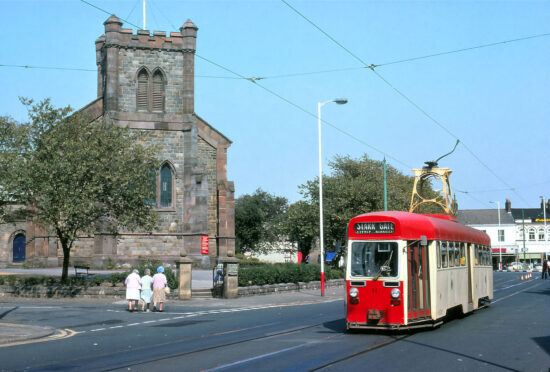 Then in this second image we take another look at 11 in its Red and White livery as it negotiates the curve through Albert Square in Fleetwood. The sign on the right guides people to the library which at the time was in Dock Street with the current library adjacent to the stop at Victoria Street not opening until 1988. 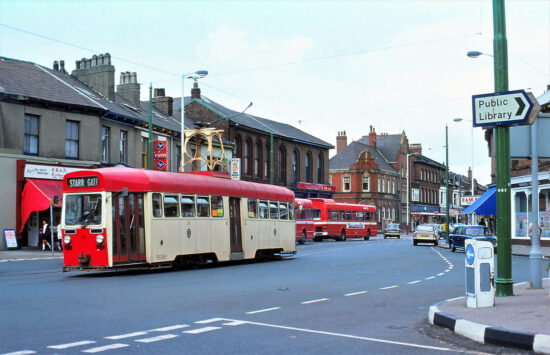