Posted on Sunday 15 August 2021 by Gareth Prior

In their fortnightly project update the Trams to Newhaven team have warned that there may have to be a change to the current plan for construction as a result of a nationwide concrete shortage. Despite this issue they have confirmed that they still expect the project to be completed both on time and within budget.

The update states: “A nationwide industry issue with the supply of concrete and other materials is impacting not only on Trams to Newhaven but construction projects across the country.  The project team continues to work on mitigation measures, including re-sequencing of works, to minimise any impact.  This may result in some sites seeing a reduced level of progress while we prioritise programme critical areas during the supply shortage period.  The project is still on course for completion by Spring 2023 and within budget.”

Despite this setback to the project there does still remain good progress at various worksites along the route of the extension with work on utility diversions, preparation for and the actual tracklaying and platform construction included. In addition there has been work on the two new susbstations for the line, with the building of that at North Leith Sands having been lowered into position on Thursday 12th August (see picture below).

The mention of the project being within budget is also key as it has recently been noted in a report to the City of Edinburgh Council finance committee that there has been a £6 million overspend at this stage compared to the budget. Additional utility diversions and the COVID pandemic have been blamed for this initial spend which has been required. However, despite this the project team and the Council have said they remain confident the final project will come within the revised final budget.

The finance report has led to opponents of the scheme to claim that it is “history repeating itself”. One of these is Conservative Councillor, Andrew Johnston, who is quoted in the Edinburgh Evening News: “Businesses and pedestrians up and down Leith Walk will be dismayed to hear that, as feared, challenges associated with diverting utilities have proven more difficult than previously estimated, with expenditure over £6 million off track. What is worse is that the inquiry into the original tram project heard that utility diversion had been underestimated the first time round and it would appear history is repeating itself. We need to know what the problems are and whether this could mean a delay in the project, which is scheduled to become operational in just over 18 months time.”

In response Cllr Lesley Macinnes, Transport Convener, said: “Contrary to councillor Johnston’s comments, the diversion of utilities is not causing us concern or resulting in delays. In fact it was anticipated due to the scale of this project, with budgets taking into account the potential for complex utilities work. This was clearly shown in the original business case which all councillors scrutinised before the democratic decision to go ahead with the tram extension. However, while there has been some increase in outturns this year, this is largely down to an enforced lockdown during the summer of 2020. The impacts of the COVID pandemic have been felt across the construction industry and it’s testament to the hard work of the project team and contractors that the project is still on course for completion by spring 2023 and within the overall budget.” 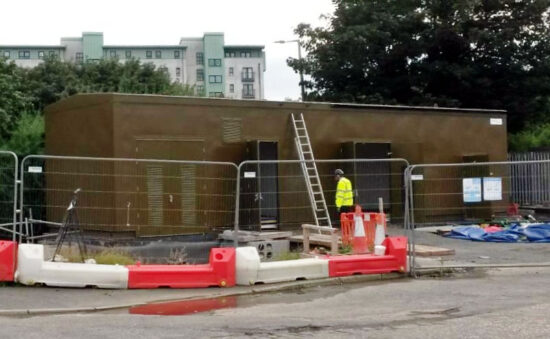 The new substation building at North Leith Sands is now in position. The equipment will now be installed ahead of it being conncected to the tramway. (Photograph by John Hampton)