Posted on Thursday 12 August 2021 by Gareth Prior

While most of the photos we have shown of the Trams to Newhaven project have concerned the installation of track and the preparations for that to happen there has also been some work on the construction of the stops – such as that at McDonald Road.

McDonald Road will be second new stop outside of the city centre (with just Picardy Place before it on the extension) and will feature an island platform. It is located just southwest of the junction of Leith Walk with McDonald Road. While track has already been installed here work on the platform is less advanced although is making good progress.

Leith Walk itself is a historic thoroughfare with its origins dating back to a protective rampart built in 1650 to protect the city from the northeast. It later developed into a footpath (possibly the reason it is called Leith Walk). By 1763, there were regular coaches along it, being a faster route than older eastern and western routes to Leith. It really became the main route to Leith after the completion of the first North Bridge (over today’s railway station) in 1772. After the street fell into disrepair, the town council rebuilt it as a wide street in 1810 raising the level of the street by six feet and introduced a toll.

The first generation tramway down Leith Walk opened in 1871 with horse trams before the Edinburgh section of the Walk went over to cable traction in 1899, with the Leith section continuing as a horse tramway until electrified by Leith Corporation in 1905. The Edinburgh section went from cable to electric traction in 1922. Electric trams operated the length of Leith Walk until 1956, the two municipalities having merged in 1920. 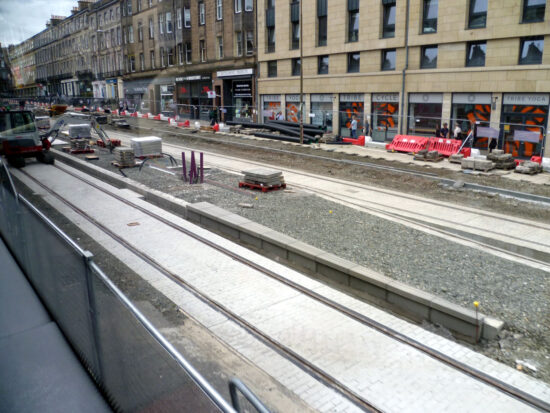 From the top deck of a bus we see the work at McDonald Road. The shape of the platform can be seen with extra work required to complete this. We are looking towards the city centre here with the Airport bound track in the foreground. (Photograph by Roy Calderwood, 8th August 2021)