Overhead problems in Sheffield and the West Midlands Metro

Posted on Tuesday 3 August 2021 by Gareth Prior

Tuesday 3rd August has been another day with overhead issues on UK light rail systems – both Stagecoach Supertram and West Midlands Metro have been affected this time and for a change it is Sheffield which has the more serious problem with that in the West Midlands being fixed relatively quickly.

Starting off on the West Midlands Metro and the first reports of the damage were made just after 0930. This time it was just south of Dudley Street where the problem was with the culprit being a broken feeder wire. As this was fairly minor issue it was fixed fairly quickly and services were able to resume through the area again just after 1100.

During the disruption trams ran between Wolverhampton St George’s and Black Lake and Handsworth Booth Street to Bull Street (no services are running into Birmingham City Centre until October). The standard ticket acceptance was put into place to allow travellers to get where they wanted to. When a through service did resume just after 1100 it was initially slightly delayed as trams were running on battery power through Black Lake, presumably while final repairs were still being made by the engineering team. However, by 1630 a full service was again running.

Meanwhile, up in Sheffield the location of the overhead issue was close to Hollinsend tramstop. This meant that no trams were running beyond Sheffield Station to either Herdings Park on the Purple route or Halfway on the Blue route. The damage here seemed more severe with photos posted on the Stagecoach Supertram Twitter feed showing a section of the overhead lying between the tracks. The problem was first mentioned at the start of service on 3rd August with Supertram expecting the disruption to continue at least until the end of service and possibly beyond.

As with West Midlands Metro, there was ticket acceptance in place on local bus services to allow passengers to complete their journeys. 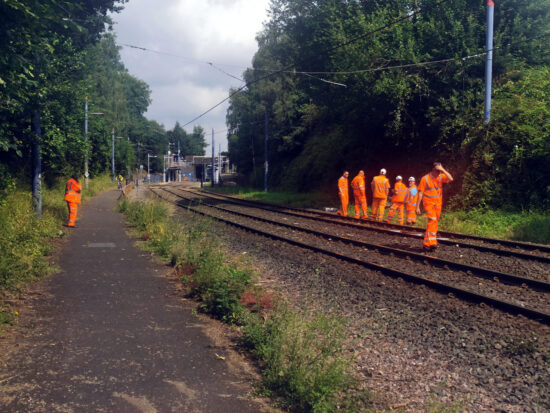 The scene at Dudley Street on the West Midlands Metro where repairs were underway to the feeder wire. (Photograph by Andy Walters, 3rd August 2021)