We start another 5 days of “Lockdown Walks” today and this edition is at Bull Street on the West Midlands Metro network.

When it first opened the stop at Bull Street was a terminus with the line further into Birmingham City Centre not having been completed at that point. It remained as the city centre terminus for almost six months between 6th December 2015 and 30th May 2016 and now just over five years later it will be a temporary terminus again with trackworks taking place in the city centre meaning trams can’t go any further. 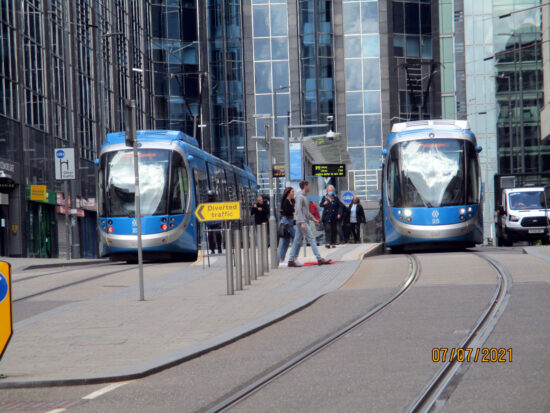 This photo is at Bull Street and shows trams at either platform face of the island platform. On the left 22 is heading out of the city to Wolverhampton (another city of course) and 25 will come towards us very soon after this image was captured as it heads up to Library. (Photograph by Ken Jones, 7th July 2021)