Posted on Sunday 1 August 2021 by Gareth Prior

For the first time in “Lockdown Walks” we feature a modern tram running in Blackpool.

It may be hard to believe but Blackpool’s Flexity2 trams have now been operating the bulk of services for over nine years with the upgraded tramway opening in April 2012. Of the now 18 strong class of trams, 012 arrived in Blackpool just a day after services had begun – 5th April 2012 – and it would just three weeks before it was carrying passengers for the first time on 26th April 2012. 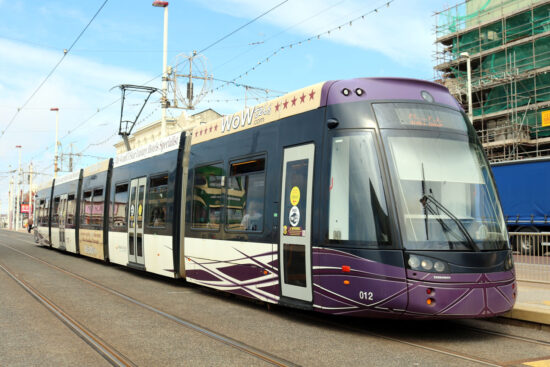 Here we see 012 standing at North Pier when working a Fleetwood Ferry to Starr Gate service. Note its long standing side adverts for Wotels.com and also the reflection of Balloon 717 in the windows! (Photograph by Trevor Hall, 7th July 2021)