The fifth and final edition of “Picture in Time” for this batch of Manchester Metrolink photos rapidly moves forward from where we have been in recent weeks as we are now in 2008 for a view of refurbished T68.

Pictured in this image is 1010 which is seen at Salford Quays on the route out to Eccles on 20th July 2008. The first thing you will probably notice – apart from the fact there is now an end fleet number which makes it so much easier to identify from the front! – is that the tram – which had originally entered service on the first day of the service, 6th April 1992 – has now received an LED destination display. This had been the first tram to be so treated and had only entered service the previous month in this condition. What this photo shows is how much clearer the destination now is for prospective passengers.

As 1010 is seen approaching the camera we can see it is off to Piccadilly with a service which would have started back at Eccles. 1010 was one of three T68s modified to become T68Ms to allow them to operate on the Eccles route alongside the T68As. 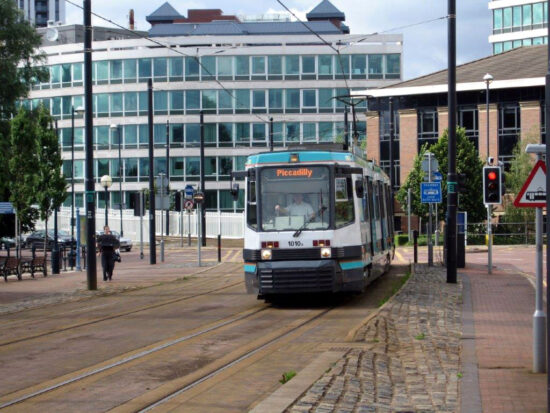