We head back to Sheffield for another “Lockdown Walk” with a view taken of one of the Citylink tram-trains which is able to run on the conventional tram network.

When the tram-train pilot was conceived the opportunity to increase capacity on the wider Stagecoach Supertram network was also taken with a total of seven Citylink vehicles ordered. Four are dedicated to the tram-train service with the other three able to run on the conventional tram network thanks to their wheel profiles. At the time of the below photo the three able to run on the conventional network were 399 205, 399 206 and 399 207. 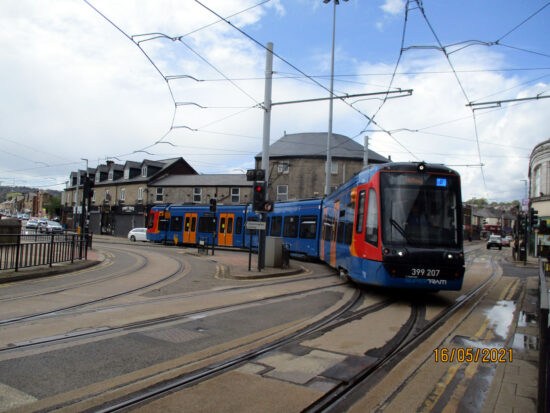 This photograph shows 399 207 – which although nominally one of three allocated to standard tram services was the only one which had been seen in action for a number of weeks – as it rounds the curve from Holme Lane and approaches the stop at Hillsborough. (Photograph by Stuart Cooke, 16th May 2021)