The past 18 months have been a case of restrictions introduced, events cancelled or severely scaled back so its always nice to bring some positive news as Isle of Man Transport have confirmed that a three day Mini Manx Heritage Transport Festival will be taking place. Running from 30th July to 1st August the Manx Electric Railway, Snaefell Mountain Railway, Douglas Bay Horse Tramway and Isle of Man Steam Railway will all be taking part to celebrate the heritage transport on the island!

Usually a five day event, the Manx Heritage Transport Festival last ran in its full form in 2019 and went online last year with the Isle of Man’s borders being closed but with those fully vaccinated from the UK, Ireland and Channel Islands now able to visit again and thanks to popular demand it has been decided to run a reduced but still action packed three day event!

Starting off on Friday 30th July, recently repainted Snaefell Mountain Railway 5 will be running special photography trips between 1300 and 1600 from the Summit to the North Shoulder. There will also be an anniversary cake cutting during the afternoon to help celebrate the 125+1 anniversary of the line while there will be the chance to get the Snaefell Mountain Railway 125th Anniversary book signed by author by Andrew Scarffe.

Sunday 1st August sees Workshop Tours at Derby Castle Sheds (at 1000 and 1100 with pre-booking required – more details below) and there will be an enhanced service on the Manx Electric Railway with open cars 14, 16, 32 and 33 (subject to the weather!) running alongside the usual timetable C.

The Douglas Bay Horse Tramway may not be running at the moment but its not going to be left out as Strathallan Horse Tram Depot will be open from 1000-1600 for tours. Some of the trams will be on display for photo opportunities as well.

Special photography trips every 30 minutes from 1300-1600 between The Summit and the North Shoulder using Car 5 in its recently applied 1895 livery.

BBQ at The Tickethall (Douglas Station) followed by a talk from Transport Director Ian Longworth. BBQ open from 1900. Tickets £10 – to make a reservation call 01624 697 457 or email steamdining@gov.im

The depot will be open from 1000-1600 for tours. Trams will be on display offering excellent photo opportunities. FREE admission!

The Trammers will also be at the Southern District Agricultural Show from 1000-1800.

Using open cars 14, 16, 32 and 33 (weather permitting) for an additional enhanced service to timetable C. The timetable will be released closer to the day 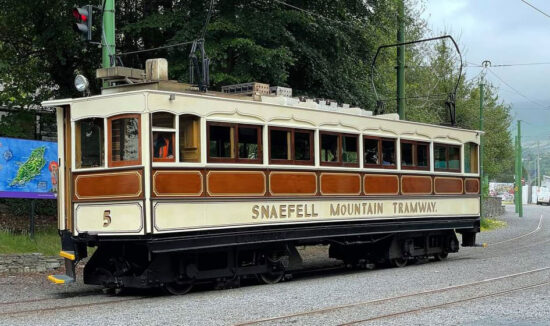 Looking resplendent in its new old livery, Snaefell Mountain Railway 5 is seen at Laxey Station. It is back in the 1895 livery and will play a starring role during the Mini Manx Heritage Transport Festival. (Photography courtesy of Manx Electric Railway Online (http://www.manxelectricrailway.co.uk))