Another trip off in South Yorkshire for this latest instalment of “Lockdown Walks” with a view taken on the Tram-Train line.

399 202 actually consists of two-thirds of the original 202 and a third of the original 399 204 after both Citylink vehicles were involved in separate road traffic collisions within the first month of Tram-Train services. In order to provide one good vehicle the undamaged sections were combined with it taking the number of 399 202. Eventually the damaged sections were repaired and these are now combined to run as 399 204. 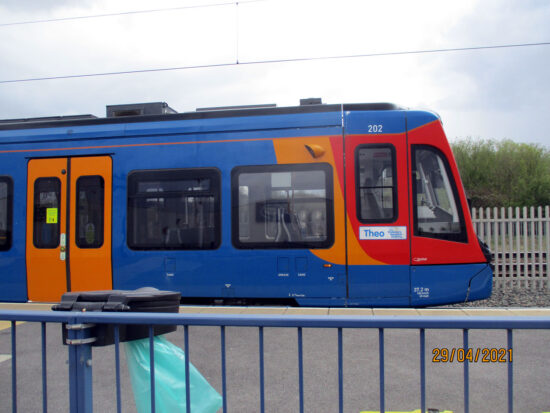 With its Theo The Children’s Hospital Charity name prominent this image shows 399 202 at Rotherham Parkgate in between services on the Tram-Train service. It will soon depart back to Cathedral one of the two services an hour which were running at the time. (Photograph by Stuart Cooke, 29th April 2021)