Around the World in Trams: Milan 1895

Posted on Saturday 10 July 2021 by Gareth Prior

Its another trip to San Francisco today for “Around the World in Trams” as we feature yet another iconic class of tram which is now a long way from home.

The second most common tram in the historic trolley fleet of Muni is the Peter Witt design which has long been associated with Milan in Italy but also saw operation in 15 cities across the United States of America. Now numbered 1895 in the San Francisco fleet, this particular Peter Witt car carried the number 1795 during its career in Milan which started in 1928 after it was built by Carminati & Toselli. This was one of 10 cars acquired by Muni in 1998 following the success of the visit of 1834 to San Francisco for the 1984 trolley festival.

This image shows 1895 in its bright orange livery – a colour scheme which has been carried by the Milan Peter Witt’s from the 1970s. Some other of the Peter Witt’s in San Francisco have received historic liveries. The date is 5th September 2006. 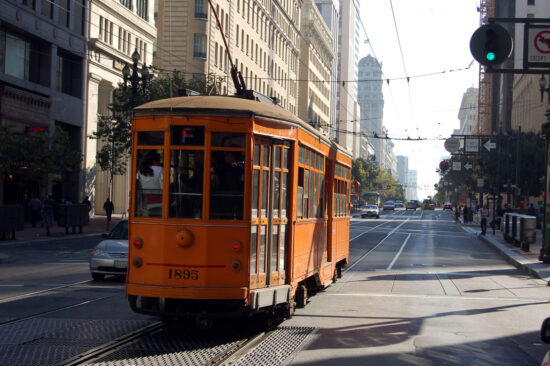