Posted on Saturday 3 July 2021 by Gareth Prior

We head off to San Francisco again in this edition of “Around the World in Trams” as we feature a tram a long way from home.

As well as the extensive fleet of PCC cars which operate the historic trolley service, Muni also own a number of trams from across the world including a couple from Melbourne in Australia. One of those is no. 496, a W2 class tram which was built in 1928 and remained in Australia until it was withdrawn in 1983 and transported to San Francisco in 1984. The tram is now much as it was during its time in Melbourne although has been made wheelchair accessible.

In this photo we see 496 following close behind PCC 1057. The PCC is another which was originally part of the Philadelphia Transportation Company fleet, where it was numbered 2138, making the move west in 1992. The livery carried on this PCC is that from Cincinnati. 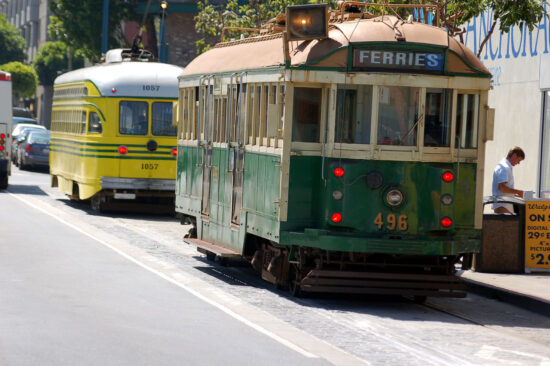