Manchester is the location for this edition of “Lockdown Walks” as we head out to the Eccles line.

Manchester Metrolink’s Eccles line finally introduced the first significant sections of street tram running on the network with the lines open before then mainly consisting of converted railway lines except for small sections within Manchester City Centre. And with the Eccles line opening in two stages it wasn’t to be until 21st July 2000 that those street running sections would really come to the fore with the line between Broadway and Eccles officially opening. With street running along South Langworthy Road and Eccles New Road this may have been the first significant on-street trams for Metrolink but it wasn’t to be the last! 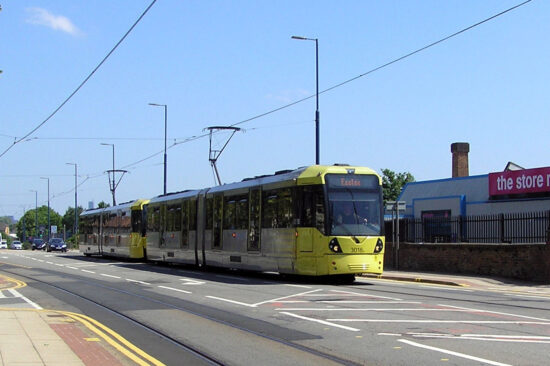 Something you would have rarely seen before March 2020 and the start of Covid restrictions were double units on the Eccles line but to aid social distancing they have been a more regular feature as seen in this view of 3018 and 3112 approaching Ladywell on the way to Eccles. (Photograph by Keith Chadbourne, 31st May 2021)