Posted on Wednesday 5 May 2021 by Gareth Prior

In another of those unexpected tram moves, the Wirral Transport Museum at Taylor Street in Birkenhead is now home to a derelict Douglas Bay Horse Tramway tramcar with no. 47 having arrived at the museum on Tuesday 4th May 2021. The tram has not run in service since 1978 and most recently has been stored in the open at Jurby Transport Museum so its move to England will hopefully be a positive development for this 110 year old tramcar!

This is a homecoming of sorts for the tram which was built in 1911 by G.C. Milnes, Voss & Co at their Birkenhead works. One of the “Bulkhead” style of trams – similar to those still running such as 42 and 45 – it had seating for 40 and was originally fitted with canvas side blinds as well as being the first Douglas Bay Horse Tramway vehicle to be built with a steel chassis. It still (just about) carries a red, white and blue livery.

47 has been at the Jurby Transport Museum since the end of 2009 but during that time has been stored outside with the ravages of outside storage clear to see by anyone who has happened to visit the museum in recent years. But Jurby hasn’t been the only place that 47 has found itself since withdrawal in 1978 – York Road Bus Depot in Douglas, Ramsey Car Shed on the MER, Isle of Man Steam Railway yard and Homefield Bus Garage all being called home by the tram at some point over the past 43 years. And now its latest home is the Wirral Transport Museum where its future should be a lot brighter!

Making the move from the Isle of Man on board the Isle of Man Steam Packet’s “Arrow” (itself deputising for Ben My Chree which is currently undergoing maintenance…in Birkenhead!), the tram arrived at the Taylor Street Museum during Tuesday 4th May and will initially be stored in a large shipping container to allow it to be fully dried out. It will then be restored.

Of course, 47 isn’t the only horse tram at Taylor Street, nor is it the first Douglas Bay Horse Tramway vehicle to return to Birkenhead in recent years! Birkenhead 7 and Liverpool 43 are both already part of the collection, both are double deckers so 47 will provide a nice contrast to that. Meanwhile sister car 46 spent a period on display at Birkenhead in the late 1990s before being scrapped in 2001.

Welcome “home” 47! We will wait with interest to see the progress on the restoration of the tram. 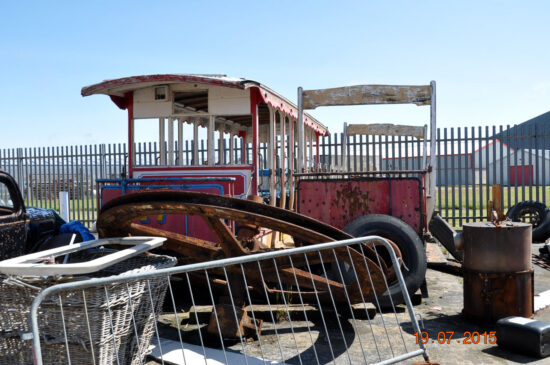 47 as it was nearly six years ago in July 2015. It is the tram on left on this image with Toastrack 11 for company alongside. (Photograph by Ken Jones)