This edition of “Picture in Time” is heading back to the 1960s as we take a look at a well travelled tram which over the years has gone from Glasgow down to England and then back to Scotland again – its Glasgow 1245.

In this view we see Glasgow 1245 on display outside the Measham Motor Museum in Leicestershire which was its first home in England after being disposed of by Glasgow Corporation Transport in the 1960s. If you took a quick glance at this photo you could be forgiven for thinking that the tram was at the junction just waiting to come out onto the road and into service but it is in fact on static display trying to persuade passers by to visit the museum. This museum is now no more with the site occupied by British Car Auctions and DFS.

As for Glasgow 1245 after leaving Measham it went down to the East Anglia Transport Museum in 1969. It remained there until 1998 when a period of storage at Rigby Road Depot in Blackpool followed before it finally returned home to Scotland and Summerlee in 2003 where it is now under restoration. 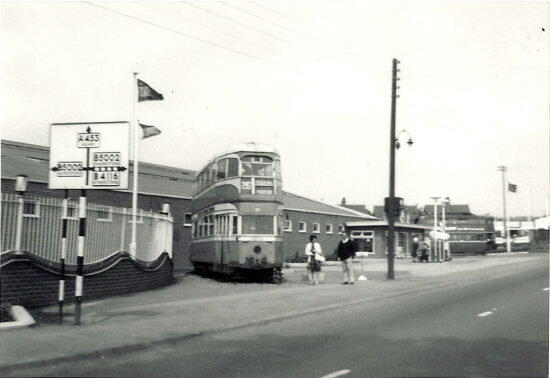 2 Responses to Picture in Time: Glasgow 1245