Today “Picture in Time” is again looking at a photo taken in early September 1976 as we return to Blackpool once more.

As with last weeks image we are again in the Fleetwood but this time we have moved slightly further south as we find ourselves on a relatively quiet North Albert Street. Pictured here is Brush Car 636 which has its destination blind set for a full length journey from Fleetwood to Starr Gate.

636 had been built as 299 in 1937 by Brush of Loughborough, receiving is new number as part of the 1968 mass renumbering scheme. It would remain in service until the end of the 2004 season at which point it became one of many trams to be mothballed and it wouldn’t run in passenger service again. Unlike many of its fellow Brush Cars it was not to be sold for preservation but was acquired by Stored Energy Technology in Derby who wished to use the tram for test purposes. Moving to Derby in 2006 it returned to Blackpool for testing in 2009 and was then back to Derby. It has since spent periods both in Derby and the Ecclesbourne Valley Railway while the testing continued over a number of years. 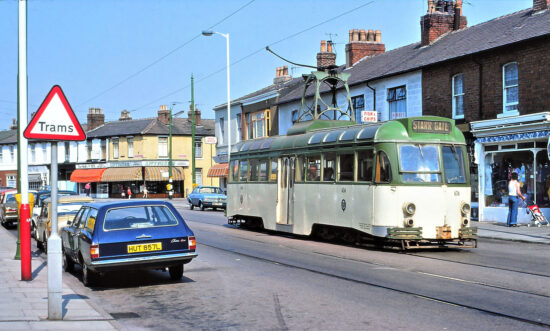