Posted on Saturday 27 February 2021 by Gareth Prior

Have you wondered what the best tram stop on a UK tramway is? Or maybe the best livery? What about the most picturesque tram stop? And then there’s the best tram of all? Well, if you have the World Cup of Trams is the competition for you!  With voting starting on a dedicated Twitter account from next week, this light hearted competition will see the UK’s tram and light rail system going against each other throughout March to see which one comes out on top.

The first round of voting will see the public voting for their favourite tram stop for sport, leisure or shopping. Voting will commence at 0800 on Tuesday 2nd March and will close at 2000 on Thursday 4th March, with three further rounds to come.

Jamie Swift, Marketing and Communications Manager at UKTram, said: “During the Covid-19 lockdowns, operators have found it increasingly difficult to generate positive digital media content, and we wanted to find a fun way to help keep the benefits of light rail in the public eye. So far we’ve seen fantastic support for the competition, with operators, tram enthusiasts and members of the public nominating their favourite stops for the first round of voting on Twitter. We’ve also received plenty of nominations for the second, third and fourth rounds, which are set to take place later in the month, and aim to find the most eye-catching tram livery, most scenic stop and best tram vehicle.”

The winners of each round will go through to semi-finals (between 16th and 18th March) with the final votes being case between 19th and 21st March. All voting will take place on Twitter at https://twitter.com/worldcupoftrams

Jamie added: “The past year has been difficult for everyone, but the World Cup of Trams offers the chance for a little light relief with some friendly rivalry between networks, and it will be interesting to see how light rail compares with other modes of transport running similar contests. The competition also offers a great way to keep light rail in the thoughts of customers ahead of their return as travel restrictions are eased.”

For each of the four categories (Best tram stop for sport, leisure and shopping, Most picturesque tram stop, Best Tram livery and Best Tram vehicle) there will be two groups of nominees with voting in each group seeing the winner progress to the semi final. At the Semi Final stage the winners of each category then move on to the final where the Best Tram Stop and Best Tram will be named.

Nominations have been made from systems around the UK including Blackpool, Edinburgh Trams, London Tramlink, Manchester Metrolink, Nottingham Express Transit, Stagecoach Supertram and West Midlands Metro. You can see the full table below. 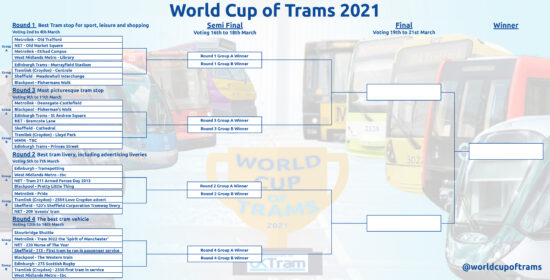