We head for another look at Crich in the 1960s for this latest edition of “Picture in Time”.

The below image was taken in April 1966 and looks as if it may have some special sort of special occasion as the photographers are out in force by the line with their attention turned towards three vehicles – none of which are runners today.

In the front of this trio is horse car Oporto 9 although there isn’t a horse to be seen as it is propelled along the line by steam loco John Bull. With 9 arriving at the museum in late 1964, its early years (from the year of this photo, 1966) saw it often used in this way and although it was occasionally hauled by a horse this was its main way of moving at this time. 9 was in this ochre livery which has since been replaced by an earlier yellow livery style as can be seen on the tram today in its static display role. John Bull has also had a facelift since this photo with perhaps its biggest claim to fame in more recent years being a short spell of operation at Blackpool in 1985. Like 9, it too is now a static exhibit in the Great Exhibition Hall. The two are joined by a full load on Southampton 45 which is just coming up behind. 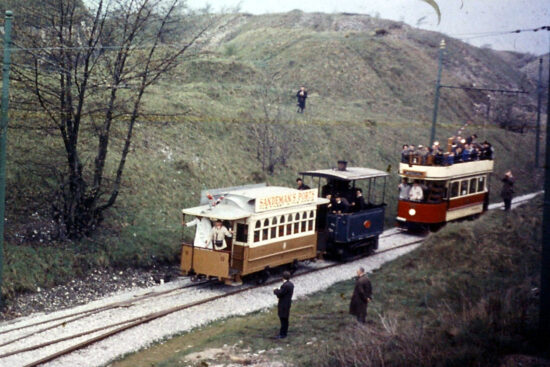