Today the vehicle we see alongside a tram is a bus which has featured a couple of times in this series already but it obviously likes to be captured alongside trams!

That bus is the only bus in the Tramway Museum Society collection – Barnsley & District 5 which was acquired in 2019 to show the first replacement for trams, initially as feeders to tram routes in the South Yorkshire town but eventually as their replacement after plans for extensions were shelved. Built in 1913 it was the final bus of five and has a key role to play in explaining the history of trams and their eventual demise across the UK.

In this photo no. 5 is joined by something which is a bit more familiar as being part of the TMS collection – Leeds 345. Restored in 2006 the tram looks resplendent in the sunshine of 21st September 2019 during the event held to celebrate the 60th anniversary of the Crich site. The tram and bus are both seen in the depot yard. 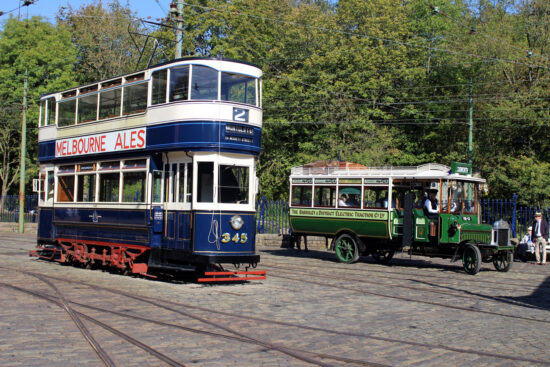