We head back to 2016 for this latest edition of “Trams &” and the Crich Tramway Village is again the location.

The below photo was taken on 10th September 2016 and shows the scene outside The Red Lion pub recreated as part of the street scene at Crich. While there are several trams visible the most prominent is Leeds 399 which seems to have paused in this location as it makes way down to Stephenson Place for its next journey along the tramway. In the distance we can see London Transport 1622 also making its way towards Stephenson Place whilst in the depot yard is Blackpool 762. You may also just be about to make-out Oporto 273 immediately behind 399.

On the right hand side our attention is drawn to visiting vehicles. In the foreground is a 1955 built Standard 8 car with the registration number WTD 953 and behind that is a Trent bus.  Numbered 571 in the Trent fleet this bus was new in 1976 but was soon severely damaged in a fire at the Meadow Road Depot but was rebuilt and was back in service the following year. After several transfers it was finally withdrawn in 2000 but was preserved and makes appearances at rallies including this trip to Crich. 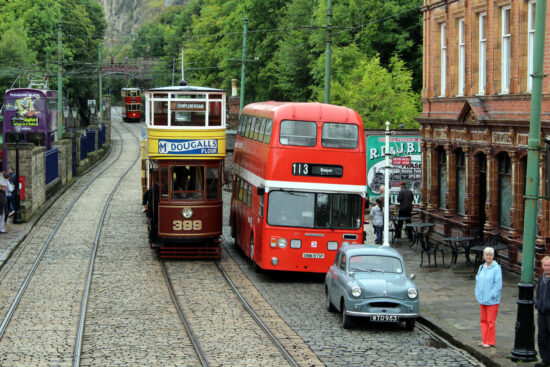