Posted on Wednesday 23 December 2020 by Gareth Prior

We’ve previously been to Sunderland to see the old Sunderland District Electric Tramways tram depot (now in use by a tyre company) but there is also a second surviving structure in the same area – a building which is now listed.

The Sunderland District Electric Tramways Ltd is not to be confused with the more famous Sunderland Corporation Tramways which continued running until the 1950s. The District Tramways ran between 1905 and 1925 with a route between Grangetown and Easington Lane along with branches to Fencehouses and Penshaw. Running on overhead electric the route obviously needed power and in the days before an effective national power system a power plant was built at Philadelphia. Located behind the Lambton, Hetton and Joicey Collieries power station it was found next to the tram depot (the building we’ve seen before in this series). Whilst it now looks a bit sorry for itself it remains a great historic survivor for now. 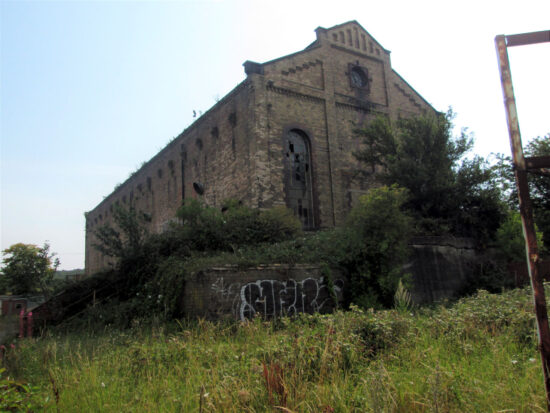 The old power station is seen in this view with a few broken windows but still retaining some of its grandeur of years past. (Photograph by Gordon Bulmer, 11th August 2020)