We start another batch of archive Blackpool tram images today and in this selection we go back to early September 1976 to see the Blackpool Tramway as it once was.

Of the once 26 strong class of Balloon Cars, so far only three of them have been scrapped and in this image we show the first of those to be cut up – 705. Starting off life as 242 in September 1942 as an Open Top Luxury Dreadnought, the tram became 705 in the 1968 renumbered by which time it had become a fully enclosed tramcar (this happening in 1942). Single destination indicators followed in 1971 and then fine years later the tram was caught on camera in Fleetwood.

705 is seen curving into Pharos Street from Queens Terrace at the very start of its journey from Fleetwood Ferry to Starr Gate in this early September 1976 image. Presumably it is a warm day as the centre doors have been left open to give a little bit of air onto the tram. The tram had between deck adverts for Fleetwood Pier on this side, kept its roof windows and was, of course, trolley fitted. Its operating days would end on 22nd July 1980 when it was involved in a head=on collision with 706 at Pleasure Beach. With the damage too severe for repairs it was scrapped at Blundell Street in October 1982. 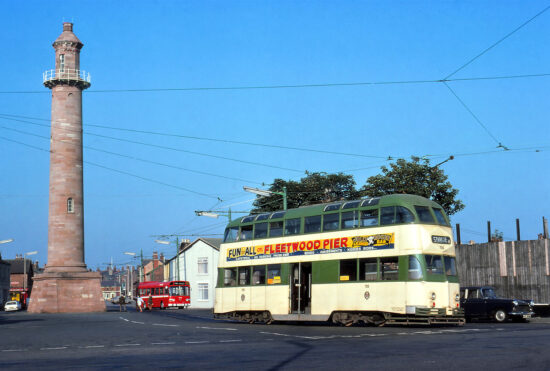