Posted on Wednesday 16 December 2020 by Gareth Prior

Beamish always provides us with plenty of opportunities for photos of trams alongside another vehicle and that is where we head for this latest edition of “Trams &”.

In 2010 Cardiff 131 made its first trip away from Crich since restoration when it paid a short visit to Beamish which allowed the chance for the water car to meet up with various other forms of transport. And so it was on 15th April 2010 when 131 was sitting on display in the Town in between demonstration trips around the museum tramway. Of note here is that the tram is on the clockwise track which at special events now is usually used for the service but obviously on this day most service cars were going round the other way.

The “&” of this image is steam roller Ayesha. This is a Aveling & Porter 8 tonne roller which was built in 1925 and is no stranger to having its photo taken alongside a tram at Beamish. 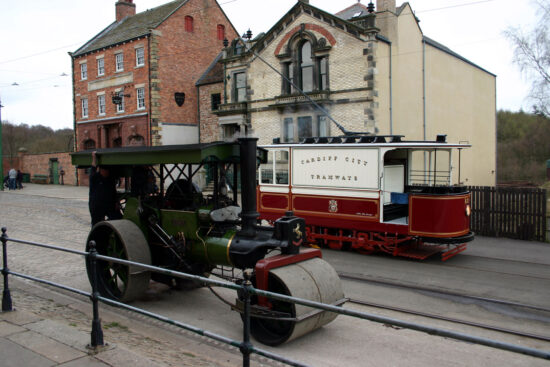