Posted on Wednesday 9 December 2020 by Gareth Prior

Taken on 27th March 2016 the below photo includes everybody’s favourite modern Sheffield tram – 120. From just an ordinary member of the fleet this all changed in 2010 when it was chosen to commemorate the 50th anniversary of the closure of the city’s original tram system by receiving an approximation of the Sheffield Corporation Tramways livery of cream and blue. Whilst the shade of blue wasn’t quite right it soon proved to be popular with enthusiasts and what was originally expected to be a short-term livery has lived on and on and remains in place today in 2020.

In this picture, taken on Infirmary Road, it is joined by 687, a Leyland PD2/12 Weyman RWB 87 which was delivered in 1954 as a replacement for the trams on the Middlewood to Eccleshall tram route. The bus is now part of the South Yorkshire Transport Museum collection and is a member of the hire fleet. 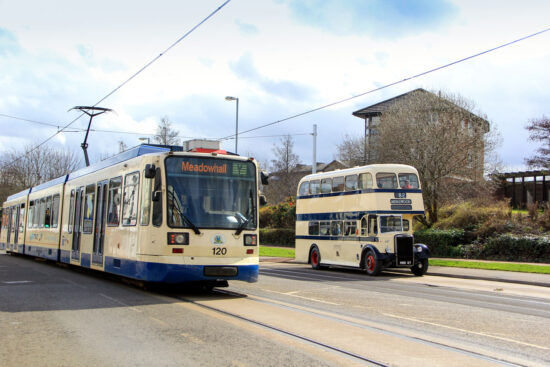