Posted on Monday 7 December 2020 by Gareth Prior

We go more modern that most of the photos featured in this series as we head off to Blackpool for a view at Fleetwood Ferry.

One of two trams to carry an identical advert for Pretty Little Thing.com, Flexity2 016 is standing at the Fleetwood Ferry terminus of the Blackpool Tramway have only recently arrived with a service from Starr Gate. The crew are taking the chance for a break before the tram returns south.

Following the construction works to upgrade the tramway the single platform tram stop was joined with this adjacent bus stop where a line 14 bus is also waiting for the off with this running to Blackpool Town Centre.  The bus is an ADL Enviro 400C which was delivered to Blackpool in March 2017 and carries the latest Blackpool Transport Palladium livery. This is 25th May 2019. 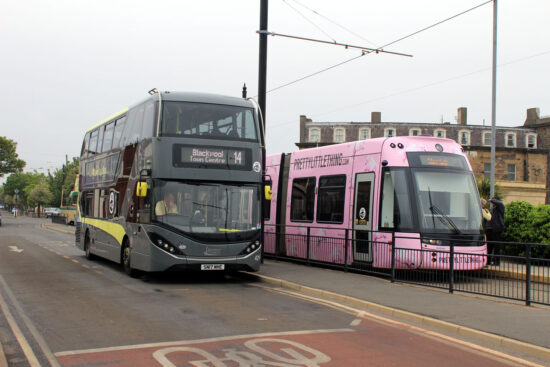