In this latest edition of “Trams &” we are heading to Nottingham for a view of two relatively modern vehicles side-by-side.

The tram in this image is Nottingham Express Transit Incentro 207 which has just come off the viaduct leading above Nottingham Railway Station and is now on Meadows Way with a service which is heading out to Toton Lane. By the time of this image on 19th September 2020, 207 had gone through the works for its second refurbishment with the most obvious change during this being the revised livery style.

As it heads off to Toton Lane it comes across another vehicle being used for public transport, this one being a double deck bus operated by Nottingham City Transport on route 48 – the Navy line. Numbered 637 in the NCT fleet this is an Alexander Dennis Enviro 400. 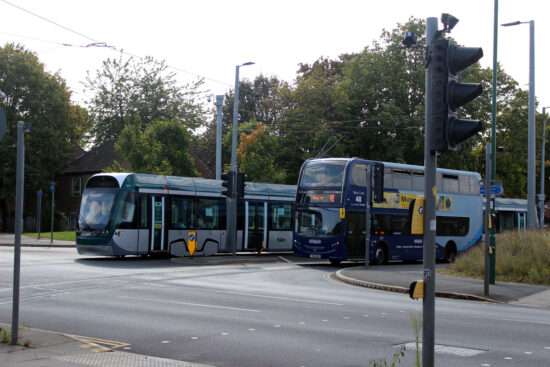