Posted on Friday 20 November 2020 by Gareth Prior

For the next couple of weeks the Traditional Tram edition of “Picture in Time” is going to be a little bit different as we feature some “trams” which were part of Granada Studios in Manchester. Obviously, they weren’t real trams and little is known about them but we present these images taken during the mid 1980s.

For a time between the late 1980s and early 1990s, Granada Studios in Manchester were open to the public with Granada Studio Tours becoming a popular tourist attraction in the city (your editor remembers visiting whilst on a family holiday to Blackpool, probably around 1992 and that is the first time I saw a Metrolink tram – although photos are very sketchy!). Included in the attraction was the Coronation Street set alongside a Baker Street set from a Sherlock Holmes series, Checkpoint Charlie and for a time sets from the Sooty & Co program (another tenuous tram link there is that a Metrolink tram did receive the Sooty & Co name too!). But as interesting as that is from a historical point of view it doesn’t have much to do with trams! The tram connection comes as there were a number of “trams” which were on site, although the internet doesn’t help much as to exactly what their purpose was. There was some suggestion they were used to transport visitors around the Tours (although its also mentioned that a bus was used for this purpose) and I’m pretty sure that in 1992 when I visited that wasn’t the case. The Tours were opened between 1988 and 1999.

This first set of photos is dated as June 1985 which would pre-date the opening of the public Granada Studio Tours and it shows one of the trams on site – apparently numbered 50 and with the B.C.T. legend on the side. It also features adverts for Lost Empires which was a 1986 ITV drama based on JB Priestley’s last novel and starring a very young Colin Firth alongside Laurence Olivier. The fact that the tram has an advert for an ITV series doesn’t suggest that this was a piece of set for a TV series which makes its purpose even more of a mystery!

Can anyone help with more information of this vehicle? We’ll be moving forward to 1986 next week where we will have more “trams” at Granada Studios to try and solve the mystery of.

Three images showing no. 50 in June 1985. With the destination blind showing “Nelson” presumably the BCT stands for Burnley Corporation Tramways. There is no track in sight which also probably means it is standing on rubber wheels? 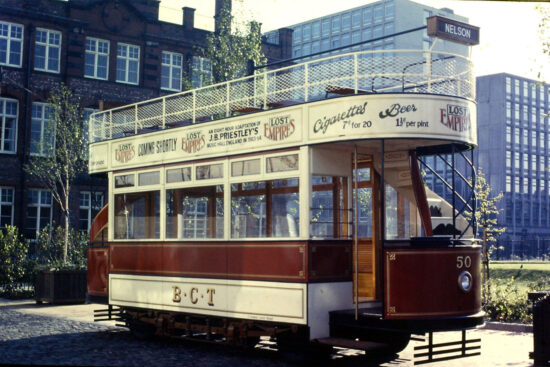 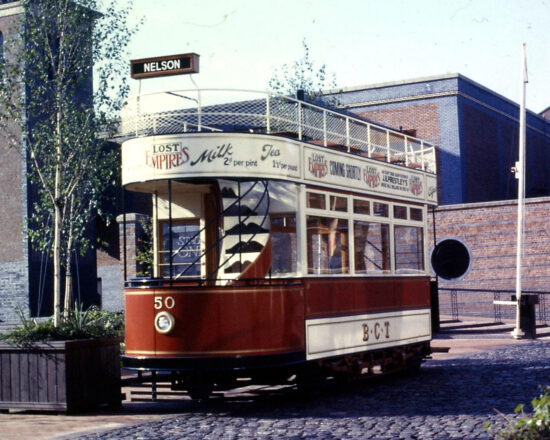 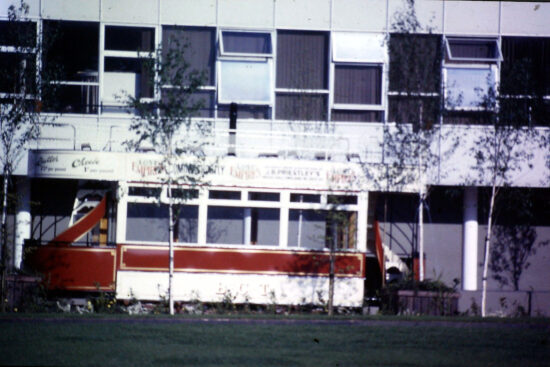