Whatever Happened To? Midland Metro 01

Posted on Tuesday 17 November 2020 by Gareth Prior

Our series looking back at a set of trams from either an event or a complete class returns from today as we take a look at the original Midland Metro trams and see what has happened to the once 16 strong class in the intervening years. Its not much of a spoiler when we say that there isn’t much of a mystery what has happened to most of the T69s as after a spell in store at Long Marston following their departure from Wednesbury Depot they were sent for scrap but that isn’t the case for all of them, as we will see in this 16 part series illustrated with photos of the trams in better days. We’ll start at the very beginning as that is apparently a very good place to start – its 01.

01 was the very first of what would end up as a 16 tram fleet of T69s. Built in Italy by Ansaldo/Firema in 1998/9 these trams were originally finished in a distinctive blue, red, yellow and green livery and started to enter service when the Midland Metro line between Birmingham Snow Hill and Wolverhampton St George’s opened on 31st May 1999.

For 01 it was the first of the trams to arrive at Wednesbury Depot on 17th February 1998 and would also become the first of the class to be withdrawn in the autumn of 2006 – only just after eight years after it arrived in the West Midlands. It would have the honour of being the tram which would hang around the depot out of service the longest with it not leaving Wednesbury until 13th October 2014 (the fourth of the trams to leave). As with all departees it went to Long Marston where it was stored with some ideas that the class may be able to be sold on for further use elsewhere. This wasn’t to be though and at an auction in January 2018 it was sold for scrapping with those unlucky trams starting to be moved to Booths in Rotherham from the April of that year. 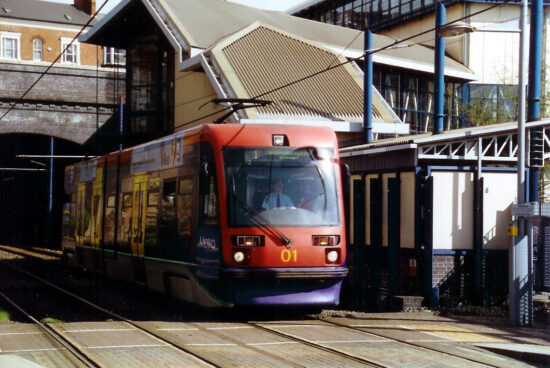 Just over two years before it was withdrawn 01 is seen arriving at Jewellery Quarter on 22nd April 2004 heading towards Wolverhampton St George’s. (Photograph by Gareth Prior) 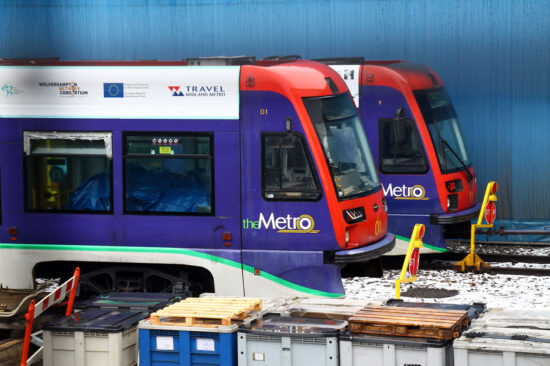 Six years after withdrawal and further two before it would leave Wednesbury 01 is seen stored in the yard at the depot with 11 (pre-repaint into the Birmingham Corporation livery) on 7th February 2012. (Photograph by Andy Walters)