Posted on Thursday 5 November 2020 by Gareth Prior

In this new photo series we take a look at the all important stops on UK tram systems starting off in Nottingham. During this series we won’t be just looking at the stop as with many modern system the stops are of a fairly uniform style and it would soon get very boring just having pictures of the stops (although we will be seeing some of that just not exclusively); we also won’t be showing you a trailing crossover here, leading crossing there. That’s what the series isn’t but what will we be featuring? Its will be fairly simple series where we see trams at, or close to, the stops – in other words its yet another excuse to show more photos of trams! The first system we take a trip to is Nottingham Express Transit and we have split the network into four sections (so we can break each system up a bit as this series continues). For the next few weeks we will be concentrating on the line to Clifton South, a line which has the distinct advantage that you can walk alongside the track all the way once it had dropped down from the viaduct over the top of Nottingham Railway Station. In this first instalment we take a look at Queens Walk.

Shortly after the line to Clifton South splits from that to Toton Lane at the junction in Meadows Way the first stop on the line is reached – Queens Walk. As with all stops on the Phase Two sections of Nottingham Express Transit this stop opened on 25th August 2015 and is of a standard design with platforms either side of the tracks and associated shelters, lighting and ticket machines. The line here is on a segregated section with no other traffic running along the tracks and footpaths either side of the tree lined road. 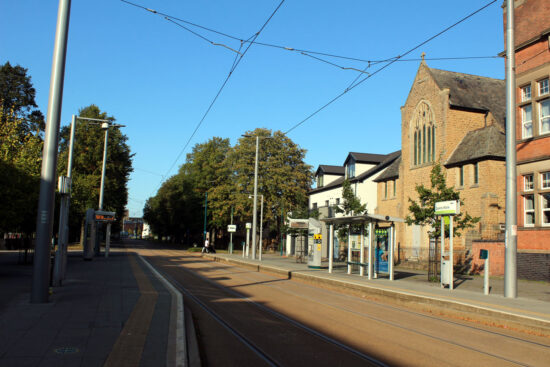 The Queens Walk stop looking towards Nottingham City Centre. The building on the centre right is the Pilgrim Centre. 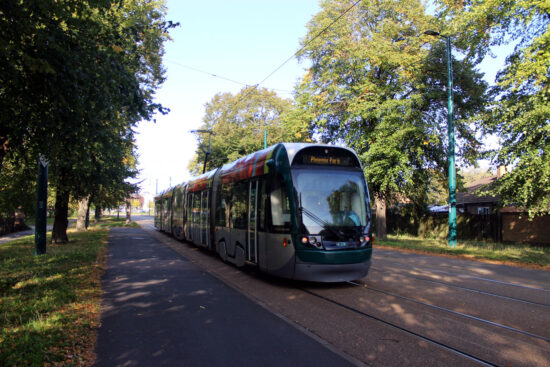 Incentro 212 has just left the stop at Queens Walk (which is just behind the photographer) as it works a service to Phoenix Park. 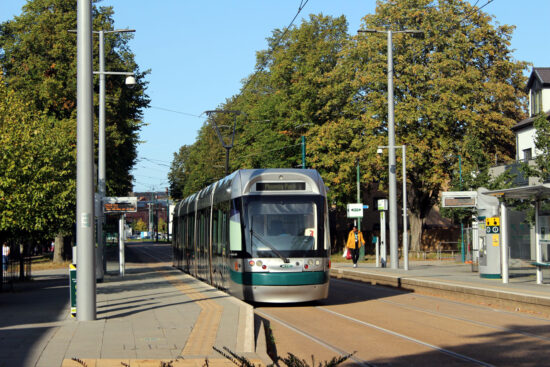 Here we see 215 paused at Queens Walk as it too heads to Phoenix Park. (All Photographs by Gareth Prior, 18th September 2020)