In Pictures: Llandudno 7 commemorates the 75th anniversary of VE Day

Posted on Wednesday 28 October 2020 by Gareth Prior

2020 has been a disappointing year for the Llandudno & Colwyn Bay Tramway Society with all events they were due to attend having been cancelled (their last remaining ray of hope that the Llandudno Christmas Parade may take place have now been dashed with this too no longer happening in 2020). But despite this they were determined to show their support for the sacrifices made by the armed forces 75 years ago – a time when the Llandudno & Colwyn Bay Electric Railway was still running – and for this a spontaneous photo opportunity was achieved at the shed where no. 7 lives.

If some of the events which the Society had been due to attend in 2020 had taken place it was planned that the 75th anniversary of VE Day would have been marked but obviously this wasn’t possibly. However, so that those sacrifices of the armed forces were not forgotten a special board was displayed on 7 for the special photo below which shows the tram “passing” the Matador lorry which is used to transport it around – when it is allowed out and about.

2020 has been a damaging year to the Llandudno & Colwyn Bay Tramway Society with the events they attend usually helping to support their aims and the regular maintenance of tram and lorry amongst other overheads. It is hoped 2021 will be a far better year but they are always keen to hear from anyone who could assist them with funding. Check out their website at http://swissitalianpaddlesteamers.com/lcbtramsoc/home.html for details of how you can help. 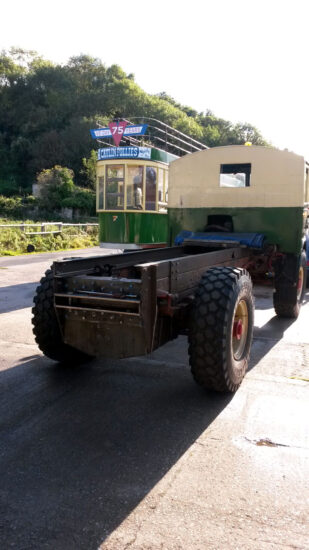 7 and the Matador lorry outside the shed where the tram is usually kept for its spontaneous photo opportunity to commemorate the 75th anniversary of VE Day. (Photograph by Andrew Scarratt)