Chesterfield welcomes back an old friend for Arts Festival

As previously reported on British Trams Online, Crich Tramway Village have received a request from Chesterfield Borough Council, for horse drawn tramcar Chesterfield 8 to make a special guest appearance at the first ever Chesterfield Community Arts Festival. Following discussions with the Science Museum, London (who retain ownership of this tram which is on long-term loan to Crich) it has been agreed that the tram will be available for display in its former home town on Saturday 4th May as part of the event.

The tram is due to be on display at Rykneld Square on May 4th between approximately 10:00am and 4:00pm. There it will be joined by the Sweet Sisters for a ‘dressing up adventure’ (whatever that is!) between the hours of 11:00am and 3:00pm, who will be encouraging visitors to have their photos taken with the tram and upload them to the festival’s Twitter and Facebook pages. Brampton Community Band will also perform by the tram at 3:00pm – which is particularly appropriate as it was built to run between Brampton and Chesterfield.

Tramway Museum Curator Laura Waters said: “We are excited to have the opportunity to take Chesterfield 8 back to its home town. A team from Crich will be with the tram all day with further interpretation and photographs of the tram and other tramways systems in Chesterfield”. Councillor Amanda Serjeant, Chesterfield Borough Council’s Executive Member for leisure, culture and tourism said: “Chesterfield’s first Community Arts Festival is an exciting event and to be able to view one of our original horse-drawn trams in its home town makes this all the more special. There is so much happening over the course of the weekend, there really is something for all the family.”

The festival as a whole takes place between Thursday 2nd and Monday 6th May although Chesterfield 8 will only be present for one day, ensuring that this irreplaceable vehicle is not left outside in such a vulnerable location overnight. As well as seeing the horse car on its native turf, visitors on the Saturday can also enjoy performances from both the Chesterfield Philharmonic Choir and the aforementioned Brampton Community Band, as well as ‘The Candy Girls’, a play written about the town’s Trebor factory and supported by the Heritage Lottery Fund. Tours of the famous Crooked Spire, an arts market and a lace making display in the Pomegranate Theatre Bar will also be on offer.

Chesterfield 8 dates from 1899, making it one of the most modern horse trams constructed in the British Isles and it had a very brief working life, with its native system being electrified when it was just five years old. It last ran in 1993 at Crich and has been a static exhibit ever since, normally residing inside the museum’s Exhibition Hall. One of the main event organisers was particularly keen for the tram to appear at the Arts Festival as he is a tram enthusiast and wanted to acknowledge the town’s transport heritage. Thanks must also go to both the Science Museum and the Tramway Museum Society for arranging for this visit to go ahead, which will make 8 the second tram to leave Crich this year following on from Glasgow 1068‘s slightly longer stay at Beamish Museum.

Thanks to Chesterfield Borough Council for supplying a press release which formed the basis of this article. 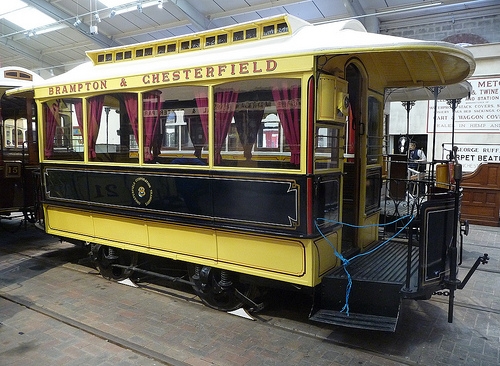 Chesterfield 8 seen in its usual position inside the Great Exhibition Hall at Crich, where it is displayed alongside other survivors of Britain's horse tramway era. (Photo supplied by Chesterfield Borough Council)