Its another visit to London for this edition of “Still Standing!” as we take a look at Brixton Hill Depot.

This was a London County Council Tramways built structure which was opened on 6th March 1924. It was originally intended to house trailer cars that had been used by the LCC on busy routes in South London since 1913 but before it could open trailer operation was discontinued in 1924 and it instead became a tram depot. There was a conduit change pit at the entrance with power inside the shed being taken from overhead wires. It closed on 7th April 1951.

The subsequent history of the depot building is a bit more unusual than most entries in this series as it was used for commercial purposes for a number of years following its closure as a tram depot, including a long-period as a car showroom. However, it remained in the ownership of London Transport (and its successors) and so when Ken Livingstone expanded the bus services in the 1990s it became an outstation of Brixton Telford Avenue bus garage (itself a new building built on the site of an old tram depot). Today it is owned by Arriva London and is used for the training bus fleet and overflow from Telford Avenue. 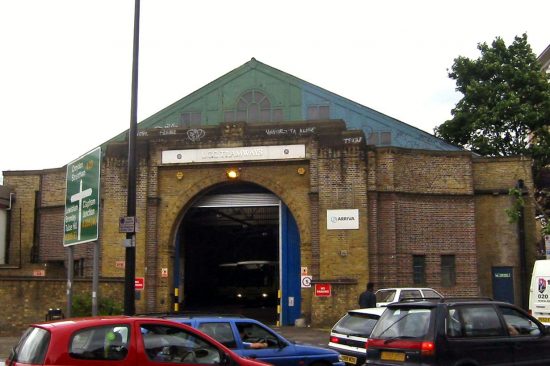 A general view of the building on 1st July 2005. Note the LCC Tramways signs above the entrance. 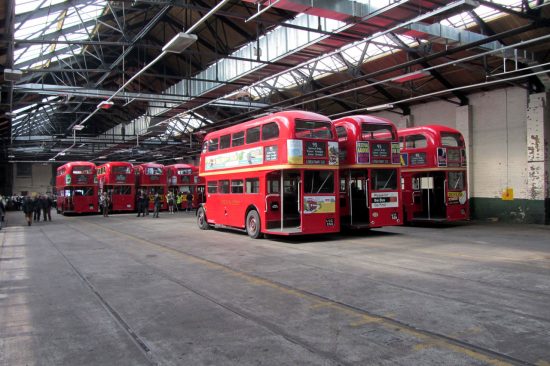 The interior of the depot on 14th May 2016 with tram tracks still in place. The occasion here was the RTW50 event which celebrated the withdrawal of the RTW class of London bus in 1966. These buses were Leyland PD2/3 Titans with Leyland bodywork to London Transport design with 500 seeing service, the first of which were introduced in 1959 as the first 8ft wide buses to operate in London. (Both Photographs by Bob Hodges)