Posted on Saturday 20 April 2013 by Gareth Prior

On Friday 19 April the Llandudno and Colwyn Bay Electric Railway Society’s replica tram 7 was awoken from its slumbers in preparation for its first public appearance of 2013 at the 1940s Weekend taking place in Colwyn Bay on Saturday 20 and Sunday 21 April. This is the first time in over 11 months that 7 has been seen in public following a problem with the 68 year old “Matador” which was previously used to haul the tram around the local area.

Thankfully the Society have now managed to get mobile again and hope to attend several events around North Wales again in 2013 to help get much needed publicity for their aims and aspirations with several projects in the pipeline. It is planned that 7 will be seen at the Alice in Wonderland event on Llandudno Promenade on Friday 3 May and then at the town’s Transport Festival and Extravaganza at Bodafon Fields between Saturday 4 and Monday 6 May. 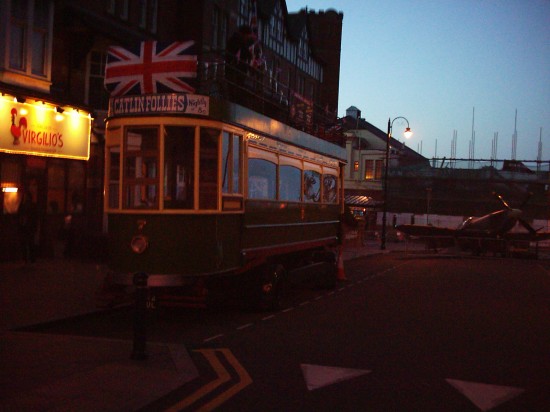 7 is seen in Colwyn Bay as final preparations are made for its starring role at the 1940s Festival being held in the town.(Photo: John Bird)