Posted on Saturday 8 August 2020 by Gareth Prior

We go on another “Lockdown Walk” in Edinburgh for this latest photo.

It has become one of the most popular locations for a photo of a tram in Edinburgh as the line curves away from North Saint Andrew Street and onto the final approach to the York Place terminus. At one stage the line was going to terminate in St Andrew Square but in the final planning stage it was decided to continue it to York Place after all. A lost railway tunnel lies beneath North Saint Andrew Street and Dublin Street which was only in use between 1847 and 1868 by cable hauled trains because of the incline. It was proposed for inclusion in the 1980s for a north/south Edinburgh Metro plan but this didn’t come about. 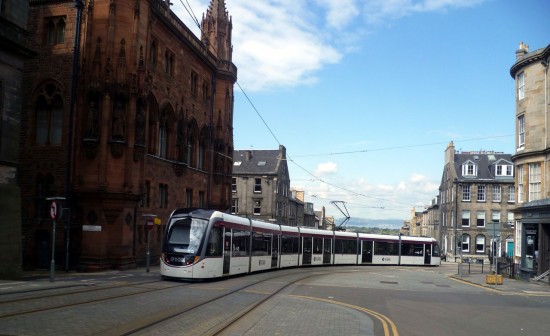 In this image we see the advert free 273 as it rounds the curve having just departed St Andrew Square. Its another shot that in pre-lockdown days would have been difficult to get without numerous people in the way but now take your pick of clear shots around the city centre! (Photograph by Roy Calderwood, 1st May 2020)