Posted on Sunday 2 August 2020 by Gareth Prior

It may be the last “Trams &” for now but we hope you agree we have almost saved the best until last as it’s a trip into the archives in the pretty unlikely location of Cheltenham.

This is July 1965 and we are in the centre of the Gloucestershire town of Cheltenham when the cameraman came across the surviving tram from Cheltenham as it was being transported to Crich. Having last run in 1930 when Cheltenham’s tramways closed, 21 was rescued in the early 1960s by a group of enthusiasts who restored the tram ahead of it being moved to Crich for display. Unfortunately, as it was a 3’6″ gauge tramway it wasn’t suitable for operation at Crich and it would only remain until 1981 when it went to Bournemouth and then 11 years later back home where it remains stored out of public view to this day.

In this photo we see 21 on the back of a lorry (not really a low loader as we’re used to seeing trams transport on today!) as it moves through Cheltenham. Alongside is Bristol FLF bus which would be scrapped in 1982.

* “Trams &” will return in the future. If you have any contributions for potential inclusion in the series please contact us in the usual way! 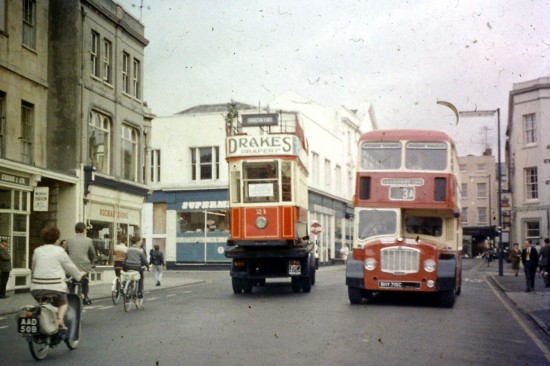