We’re off to Birkenhead for the next couple of weeks as we take a look at some trams running during the 2006 Wirral Bus and Tram Show.

The first tram we feature is former British Trams Online Tram of the Year winner – Liverpool 762. Built as part of a batch of 12 trams at Liverpool Corporation Tramways own Edge Hill workshops in 1931-2, 762 remained in service until 1955 when inevitable withdrawal came. By this time it had received the later green livery the trams carried and has also been reconditioned in the period 1938-44 which included the fitting of new motors and lightweight bogies. After withdrawal the lower deck became a bowling green clubhouse in Newsham Park.

In the late 1970s it was rescued by members of the Merseyside Tramway Preservation Society with restoration work commencing in 1979 at Green Lane Depot. Work on restoring the tram became a nomadic affair with it being worked on at both Speke and Princes Dock before being paused to allow Birkenhead 20 to be completed first. 762 entered the depot at Pacific Road on the Birkenhead Heritage Tramway in February 2000 and with work completed it entered service on the Wirral in 2001. Since then it has visited Blackpool in 2010 on loan for the Tramway’s 125th anniversary and in the process won the British Trams Online Tram of the Year contest.

In this photo – taken at October 2006’s Bus and Tram Show – we see 762 on the Heritage Tramway outside Pacific Road just approaching the passing loop here with a healthy looking load of passengers. 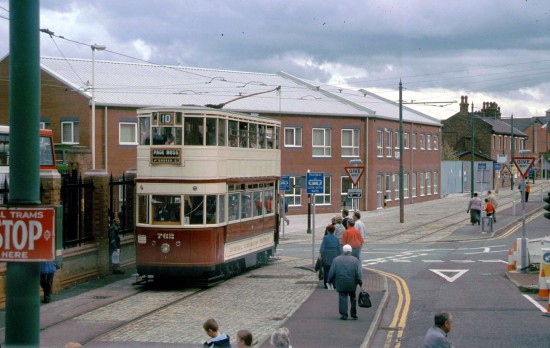