In this edition of “Picture in Time” we are heading to Manchester Square in Blackpool where we see two trams passing during 2001.

This image shows two trams which have passed into preservation but whilst one is now in store the other has continued to operate on its home tramway, making itself one of the most popular Balloon Cars running as part of the heritage fleet. The trams we can see are Brush 627 and Balloon 715 passing whilst working in September 2001, on an exact date unrecorded. The single-decker is running through to Pleasure Beach whilst the Balloon Car is heading north all the way to Fleetwood.

627 is carrying an all over advert for the Buccaneer Family Bar at Coral Island – a long-standing advert which was first applied in the April of 2001 and would be retained on the tram even beyond it was withdrawn at the end of the 2004 season. When the tram was reactivated for the Farewell to Fleetwood tours in November 2009 it still carried this long-expired all over advert and would continue to do so until it was put on display at Pleasure Beach as the first Fleetwood Heritage Leisure Trust tram to be put beside the loop, initially in a special gold and white livery to celebrate the Queen’s Jubilee.

As for 715 it is in the standard Green and Cream livery of the 1990s. Of course, this tram is now in the ownership of the Fylde Transport Trust but has not left the Blackpool Tramway being one of the most popular members of the heritage fleet. 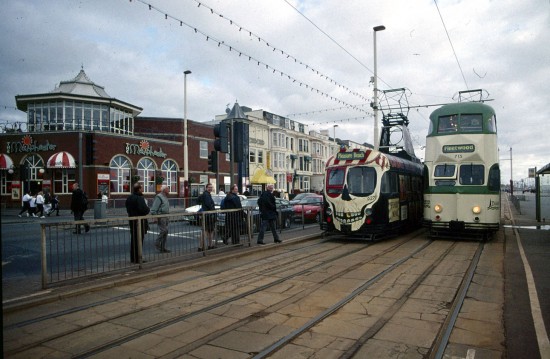