Posted on Saturday 18 July 2020 by Gareth Prior

It was the very first new tram to arrive in Edinburgh – in 2010, some ten years ago now! – Edinburgh Trams 252 and it is the subject of our latest “Lockdown Walk”.

252 was delivered to the City of Edinburgh on 27th April 2010 – by far the first piece of the plan to bring trams back to the city to be anywhere near ready! It was put on display on Princes Street, at the site of the eventual location of the tramstop there, from April through until November of that year before it had to be moved. Moved in sections to secure storage at Broxburn it finally made it to the new Gogar Depot on 18th October 2011 – some 18 months after first arriving in Scotland. 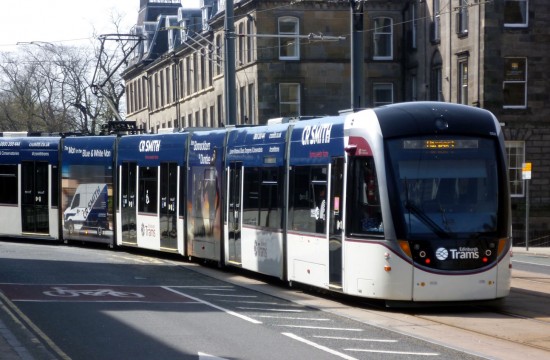 This photo shows 252 – one of the trams to retain C R Smith adverts – heading away from the camera and York Place as it curves into North Saint Andrew Street with a service for the Airport on 23rd April 2020. (Photograph by Roy Calderwood, 23rd April 2020)

This entry was posted in Edinburgh Trams, Lockdown Walks. Bookmark the permalink.