Around the World in Trams: Oslo 166

Posted on Saturday 20 June 2020 by Gareth Prior

The next stop on our world tour is Oslo in Norway where we will spend some time looking at the trams in the Norwegian capital city.

The history of trams in Oslo can be traced back to 1875 when a short-line opened in the city centre using horse traction. Electric trams arrived in 1894 with the following six years seeing the complete upgrading of all lines to the new fangled electricity. Expansion of the network continued until the Second World War intervened and then from 1948 route closures started and 12 years later the council announced plans to completed close the network. Fortunately, however, this didn’t happen and in 1977 the decision was made to start at modernising and upgrading the remainder of the network. There were even new route openings in both 1995 and 1999 but that was not the end of the fluctuating fortunes of trams in Oslo as in the early twenty-first century the decision was again taken to abandon large section of the network. But, again, this didn’t transpire and only one line to Kjelsas was closed in 2002. The network today consists of 99 stops and six lines with a fleet of 72 vehicles operating the service.

These two images from Oslo show no. 166. This tram is a SL95, one of 32 built by Ansaldo/Firema, and is double-ended. This particular example was introduced in 2000. In both shots 166 is heading towards the camera with a route 18 service to Rikshospitalet (a local hospital) – a 1999 extension of the network. Photos taken on 11th June 2016. 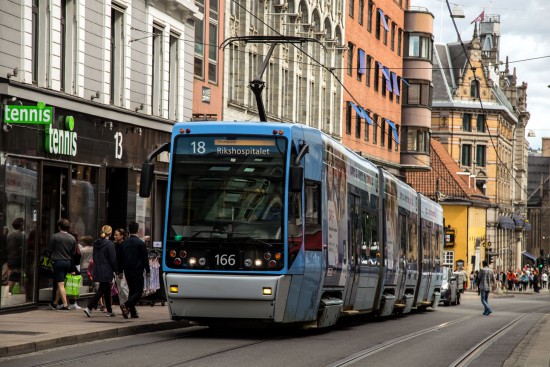 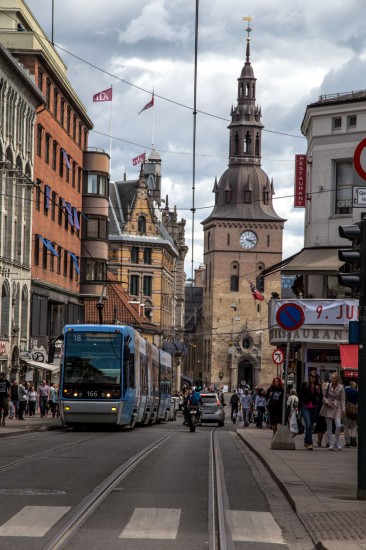