We end our time in San Francisco with one further image showing two of the PCC cars stabled at the end of the “F” line.

Closest to the camera here we see 1051 with 1056 also captured in this image. We’ve already featured 1056 in this service which carries the Kansas City Public Service Company livery and was one of the ex-Philadelphia PCCs acquired for the start of operations on the “F” line. 1051 is also from the same batch of cars – numbered 2123 in Philadelphia – but has not received a “tribute” livery to other systems as it is in a 1960s version of the San Francisco Municipal Railway colour scheme. This is one of the PCCs which had a second overhaul at Brookville Equipment Company in Pennsylvania, re-entering service in 2017 and it remains in service today.

But in this view we see the two PCCs in September 1996. 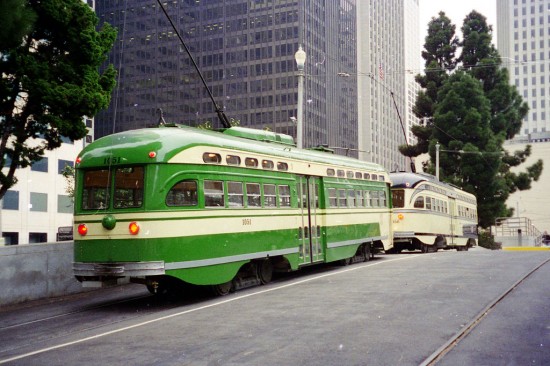