In this latest edition of “Trams &” we head to the East Midlands for an image of a tram and train on Nottingham Express Transit.

With several modern tramway systems either taking over or running alongside railway lines there are numerous opportunities of capturing trams alongside trains, none more so than the section of Nottingham Express Transit from Hucknall to just before the tramway turns up to Wilkinson Street. The Robin Hood Line between Nottingham and Mansfield is the railway which runs alongside NET and a variety of DMU classes have been utilised on this service over the years with East Midlands Railway the current operator.

When this view was take on 23rd September 2013 the train operating company was East Midlands Trains with their colourful blue, red and orange – not dissimilar to fellow Stagecoach company Supertram’s livery – seen on this unidentified class 156 DMU. The train is speeding past the tramstop at Moor Bridge on the Hucknall branch. Just arriving at the stop is Bombardier Incentro 205 which is working a service to Station Street, the then terminus of the line. 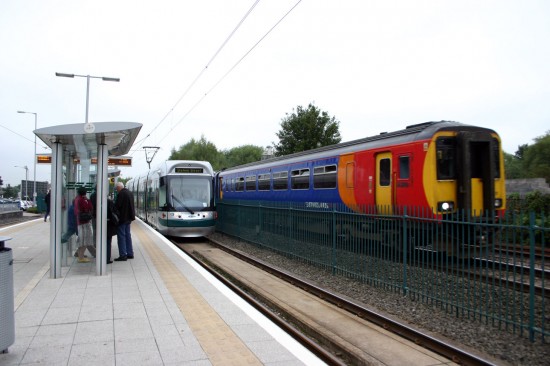