Whatever Happened To? Blackpool Centenary 645

Posted on Wednesday 20 May 2020 by Gareth Prior

In this edition of the series where we look what happened to the tram which ran on the last weekend of the traditional Blackpool Tramway we take a look at another of the Centenary Cars.

Of all the trams to run over the last weekend in November 2011, Centenary 645 was the one which would return to depot in the least style! 645 would run on both days of the last weekend, both times allocated to the Pleasure Beach to Little Bispham service, but on Sunday 6th November it would fail whilst on a run to Little Bispham. With it not possible to resurrect the tram into service Unimog 939 was called into action and coupled to the tram it would tow 645 back to depot. For a class which were dogged by reliability problems, especially in their earlier days, it was a rather apt end to its operating career with it back at depot around 1215, just not in the style it would have hoped for!

645 was another tram to leave Rigby Road in January 2012 – which would be a very busy month of departures – and like 643 it had been acquired by a caravan park, this time it was the Windy Harbour Caravan Park. It would be retained at its caravan park for longer than 643 but it too would not be there for the long haul as in July 2017 it was acquired by the Blackpool Heritage Leisure Trust and returned to Rigby Road during that month. Remaining stored at Rigby Road to this day, it awaits the chance to shine once more. 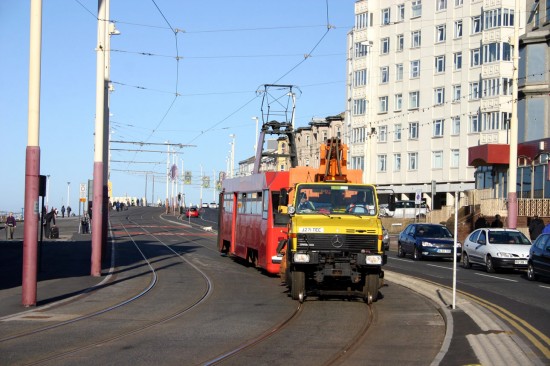 Not the way that 645 would have wanted to end its operating career! With Unimog 939 towing the tram after its failure. The two vehicles are just approaching the Metropole Hotel from the north. 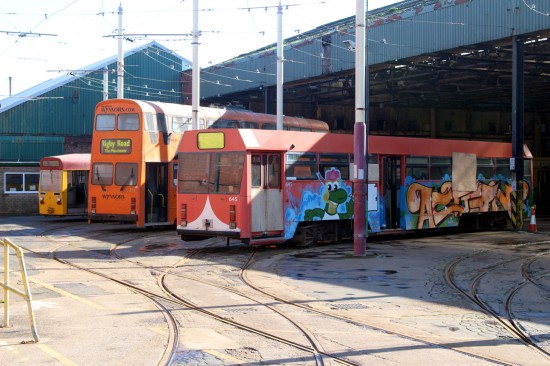 645’s last public appearance was on 28th September 2019 when it was displayed on Rigby Road Depot fan as part of a One Person Operated tram line-up. Showing its graffiti livery applied whilst at the caravan park 645 is joined by Jubilee 761 and OMO 8. (Both Photographs by Gareth Prior)