In this new photographic series we will be featuring trams alongside other vehicles. Whether that be a bus, train, steam road vehicle, car or in this case a trolleybus anything goes during this series! As long as there are at least two different forms of transport we will be featuring it as part of our continued Coronavirus output. In this first edition we are heading to the Black Country Living Museum in Dudley where we see Wolverhampton & District 34 and a Bournemouth trolleybus.

The below photo was taken on 3rd June 2009 and shows Wolverhampton & District 34 with Bournemouth trolleybus 297 behind close to the entrance at the Black Country Living Museum. The tram is a “Tividale” type single-decker which was built in 1919 and only had a nine year operating career before being withdrawn from service. Restored to service at the Black Country Living Museum it is now waiting an overhaul following the return to service of similar car Dudley, Stourbrige and District 5.

The trolleybus is Bournemouth 297 a Sunbeam MF2B which entered service on the south coast in 1962 and withdrawn in 1969. Obviously at the time of the picture it was based at the Black Country Living Museum but is now resident at the Sandtoft Trolleybus Museum, who are now the owners of the vehicle. 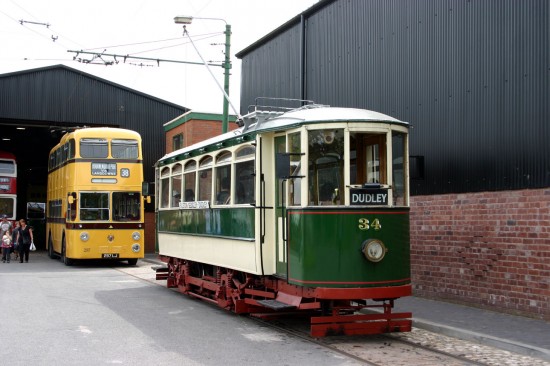