For this next batch of archive Blackpool tram images we are heading back to 1975 for a series of images taken on a sunny July day. With early advertising liveries starting to make their presence felt plus the OMO cars with their non-standard liveries it was a colourful period for the Blackpool Tramway and we start off with the first of the 13-strong OMO cars.

This photo shows OMO 1, in the original Plum and Custard livery, just to the north of the Metropole Hotel. The tram is just moving to the street track around the hotel and unlike today will probably come across some confused motorists as a tram comes towards them!

1’s career as an one man operated tramcar started in October 1972 when it was one of the first of this new class of trams to enter passenger service on the Blackpool Tramway. It had started off life as Second Series English Electric Railcoach 269 in June 1935 before receiving the number 616 in the 1968 mass renumbering scheme. It would only last a further two years in service before withdrawal and then conversion into an OMO car. It would remain in service until June 1989 when it was the ninth of the class to be withdrawn; having been stored at Rigby Road Depot for over four years it was scrapped on site in November 1993. 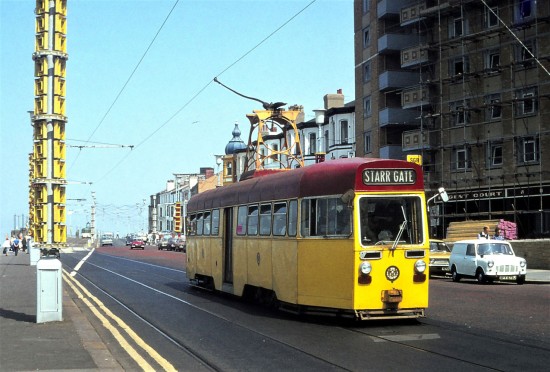