Posted on Thursday 26 March 2020 by Gareth Prior

Starting this evening we are back with “Picture in Time” and some traditional trams from Crich over the next few weeks. We start off by heading back some 52 years to the early days of the museum.

This photo was taken on 20th April 1968 and shows Glasgow 812 passing the quarry as it returns to the main museum site with an almost full load of passengers on board. Of note in this view is the complete lack of barrier or fencing between the tramway and quarry with a family standing in the quarry looking at the tram travelling by. Also seen here is plenty of spare track for use on the tramway in the future.

1968 was to see the tramway extended through to Wakebridge with the opening of this section taking place on 25th May, just over a month after this photo was taken. For the 13 months leading up to this time the limit of the tramway was Cabin Crossing which is the vicinity of where this photo was taken. As for the tram we see in this image, 812 had entered service at Crich during 1966 and in the nearly 54 years since it has spent more time in service than not at the museum, although is presently withdrawn from service awaiting workshop attention. 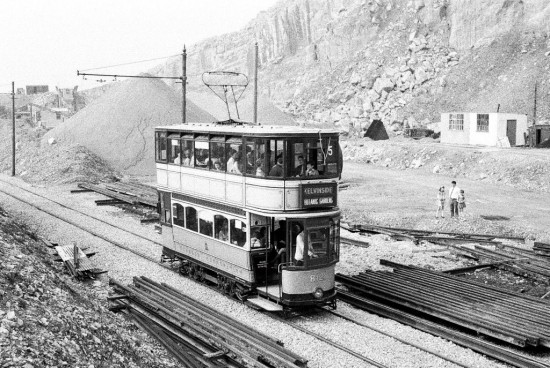 1 Response to Picture in Time: Glasgow 812